Amy Smitter worked at the grassroots level across the state as a long-standing leader of Michigan Campus Compact, one of the state’s key infrastructure organizations. While focused on college-aged volunteering, Smitter was involved in partnering, consulting, and assisting the various related philanthropy support institutions in the state. Experience at the national Campus Compact provided Smitter with a context for reflecting on the work in Michigan, while practical experience in organizing and partnering at the community level supported her ability to analyze what has happened in the state over the past decades. 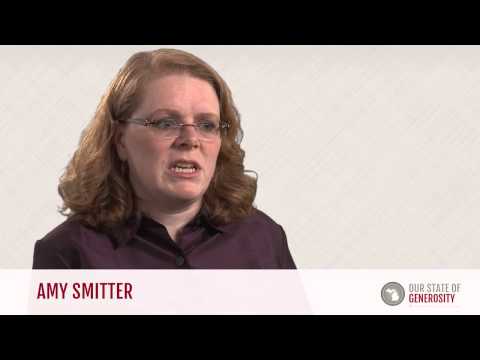 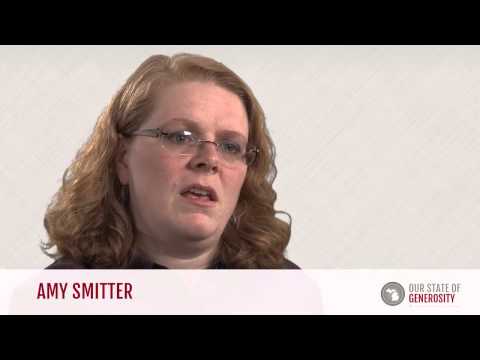 Amy Smitter describes how servant leadership was integral to the development of Michigan's philanthropic infrastructure. 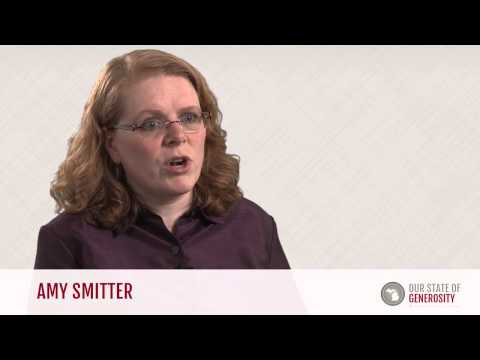 Ms. Amy Smitter talks about the development of Campus Compact. 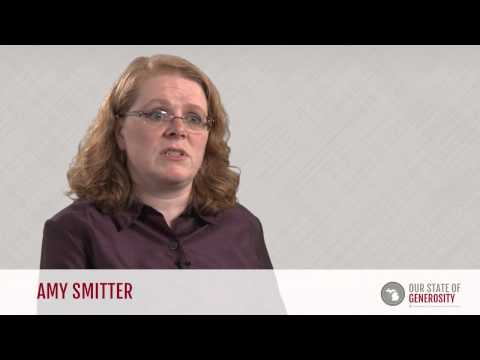 Ms. Amy Smitter talks about the mission of the ConnectMichigan Alliance (CMA). 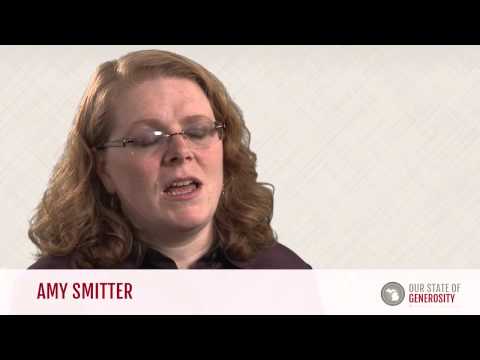 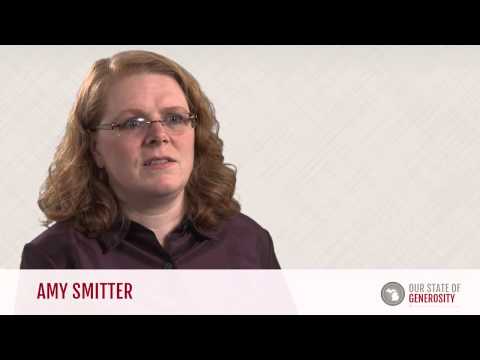 Ms. Amy Smitter talks about how the continuum of philathropy in Michigan presents opportunities for every citizen. 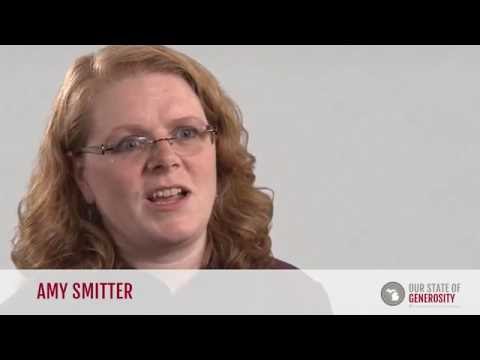 Ms. Amy Smitter talks about her career in philanthropy.

Amy Smitter’s family background was very influential in introducing her to the world of philanthropy. Growing up, her family members were active volunteers in their hometown of Albion, Michigan, and instilled in her the importance of volunteering.

Throughout her career, Smitter has tirelessly worked to promote community-based learning practices, service-learning, and civic education. She has a strong interest in college students and the possibilities that service-learning and volunteerism offer.

From 2000 to 2009, Smitter served as executive director for Michigan Campus Compact. Under her leadership, fundraising grew by more than 670 percent. She spearheaded multiple projects that helped advocate for the importance of higher education and collegiate volunteerism, including: developing the College Positive Volunteerism project, forming the rural service-learning network, partnering with state officials for the Mentor Michigan Partnership, and raising money for the Investing in College Futures grant. Smitter partnered with the Department of Human Services to help foster care youth attend college through the Foster Care College Initiative, which led to the formation of the Seita Scholars at Western Michigan University.

“I think college and university presidents give energy to Campus Compact because they really believe in education and they believe in the power of education. They believe that higher education has a civic purpose to promote our democracy. By joining Campus Compact, they are able to be part of a larger conversation about that,” said Ms. Smitter. “In addition to that, Michigan Campus Compact is the only place in the state of Michigan where two-year, four-year, public, private, secular, and faith-based institutions get together and talk. It’s around this idea of service, volunteerism, how do we create a stronger state, how do we create stronger students who learn and want to stay here in the state of Michigan or do good things for the world.”

During her time at Michigan Campus Compact, Smitter helped facilitate the merger with the ConnectMichigan Alliance (CMA). CMA began in 2001 with the mission of promoting and strengthening a lifelong ethic of service and civic engagement throughout the state of Michigan. It sought to build and strengthen Michigan communities by supporting existing nonprofits through promotion of volunteerism, advocacy and public policy, training and technical assistance, and direct programming. CMA aimed to increase capacity and effectiveness while decreasing overall administrative cost and burden to support nonprofits by housing all statewide volunteer and service-learning initiatives under one administration. An innovative and collaborative initiative, it consisted of a partnership between Michigan Campus Compact, Michigan Community Service Commission, Michigan Nonprofit Association, and Volunteer Centers of Michigan.

CMA was funded by an initial endowment of $20 million through public and private funding. In 2000, Gov. John Engler signed a bill providing a challenge grant to build CMA. The grant provided up to $10 million of public funding that had to be matched on a 1:1 basis by the private sector within one year. Smitter and the CMA leadership team worked persistently to help raise funds for the matching grant.

“… When I was fairly new into Campus Compact and working within MNA, we were able to start working on the ConnectMichigan Alliance which is something, as a young professional, I never would have been able to imagine as a possibility or how it would even come together. That experience alone… [has] taught me that almost anything is possible, and I still truly believe that. I think it helped me to remain idealistic the longer I stayed in the profession,” said Ms. Smitter.

Smitter then moved on to serve at the national level of Campus Compact as director of institutional development. During that time annual giving increased by 39% and staff and board giving achieved 100% for the first time in Campus Compact’s history. She led fundraising efforts on behalf of the more than 1,100 colleges and universities involved with Campus Compact.

Amy Smitter was interviewed regarding her insights and experiences in working with Michigan’s philanthropic community and the Our State of Generosity (OSoG) partners. The following quotes specifically relate to the five organizing themes of the OSoG project.

“I also think that the philanthropic leaders here in the state have done a really good job in mentoring nonprofit leaders and association leaders in the state so that they can continue to work collaboratively and to think collectively.”

“I think servant leadership is a part of our culture here in the state of Michigan. I think it’s a really important part of our culture that’s been nurtured by many, many people. I think once you learn to be a servant leader, it continues to grow and it grows in the people that you support and mentor and bring into the system, bring into jobs within the field and that kind of thing.”

“It seems to me that there’s a lot less competition in the state of Michigan between nonprofits. I think that has something to do with the servant leadership model that’s been promoted here.”

“Michigan is very different than other states. Having worked at the national level now, I find that often when I’m talking to people, they just don’t understand how interconnected they could be with others, because I don’t think it’s promoted in other states the same way it is here in the state of Michigan. I think that has a lot to do with the philanthropic community in the state. They have asked people to come together and to think strategically about what would be best for the state, how do we best deliver services, and how do we best spend our money in the state. I think those conversations have really, in a lot of ways, inspired people to think bigger, to think beyond what they normally would do with their nonprofit.”

“The leadership here in the state (from the philanthropic community and the association work in the community, the higher education community), the things that I admire that I try to model in my work [are]: seeking to understand first; calling on colleagues, not just jumping to assumptions or conclusions, whether good or bad, about what might be possible; to decide to stick with a conversation a little longer to see what might be rooted out and what might be able to blossom and come from that kind of thinking.”

“When I think about the opportunity for every citizen in the state of Michigan (and frankly the world) to be part of service and volunteerism and to have that civic voice and to feel empowered by the things that they can bring and do for the community, I feel really optimistic about that. We had always hoped that we could start children at a very, very young age learning how to serve and bring them all the way through adulthood to be able to serve in their communities and to grow in that process and be part of it.”

“I think that there are so many systems and structures in place that make it difficult to do that. I do think that progress has really been made, either through Learning to Give, Campus Compact, The League, Volunteer Centers of Michigan… We have the puzzle pieces in the state of Michigan to be able to stitch that kind of continuum together. I think that the barriers that we’re facing are sort of the institutionalization of education, having to unwind, sort of, those processes and reach so many people that need to be a part of it.”

“Frankly, [it’s] a really difficult time reaching every single family, because we know that children who learn to volunteer through their home life will continue to volunteer as adults. So, it’s critically important [that] if they don’t get that as part of their family structure, that we reach them. The best possible way is through school systems, but those systems are hard to change. Not impossible, but hard. We’ll continue to work on that obviously. Everybody will continue to work on that.”

“I think that there are a couple of reasons that Campus Compact here in Michigan is stronger. A lot of it has to do with the founding organizations that you were talking about, as well as the philanthropic commitment in the State of Michigan. Michigan Campus Compact is not the largest Campus Compact and it doesn’t have the largest budget, but I think it has the deepest roots.The reason I think that is true is because of our partnerships with other organizations in the state, as well as our deep commitment in Michigan to make sure that campuses that want to join Campus Compact are truly committed to the mission and goals of the organization. They’re not just joining it to be on the list with other presidents that they consider peers.Michigan Campus Compact has forged these innovative partnerships and been invited in to some of these innovative partnerships with some of these larger organizations in the state. That has certainly helped us to create a base of legitimacy, but also I think connectedness, that people want to be part of in the state.”