Arend (Don) Lubbers, second president of Grand Valley State University, championed and supported the establishment of the first university academic center on philanthropy in Michigan. The center is one of the largest and oldest of its kind in the nation. Lubbers drew his insights from a refined understanding as the leader of large institutions and significant strategic initiatives, and as a long-time participant in public-private joint ventures. 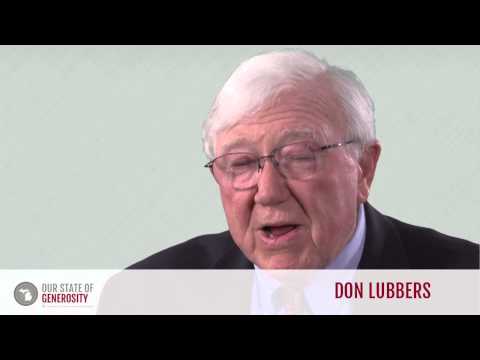 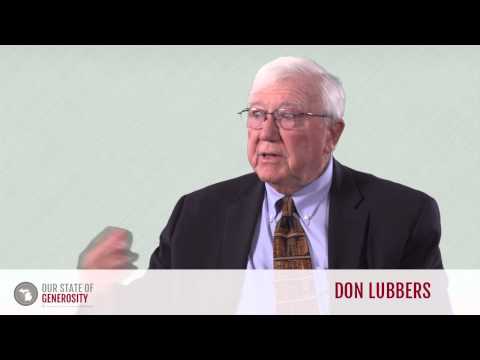 Mr. Don Lubbers talks about his career in philanthropy. 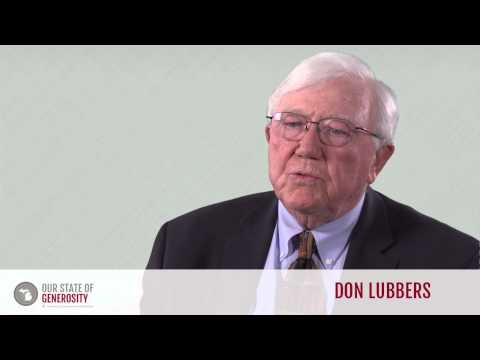 Mr. Don Lubbers talks about how and why Grand Rapids and Grand Valley State University became home to the Dorothy A. Johnson Center for Philanthropy. 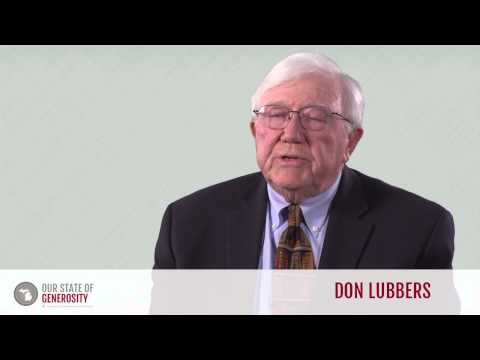 Mr. Don Lubbers talks about why Grand Valley State University chose to name their center for philanthropy after Dorothy A. Johnson.

Don Lubbers earned an applied baccalaureate degree from Hope College, and a Master of Arts in history from Rutgers University.

Growing up, Lubbers spent a considerable amount of time on college campuses, as his father was president of Hope College from 1945 until he retired in 1963. These childhood experiences helped Lubbers become intimately acquainted with fundraising, and introduced him to the importance that philanthropy plays in a community.

After obtaining a master’s degree from Rutgers University, Lubbers spent two years teaching history at Wittenberg College in Ohio. In 1960, Lubbers became the vice president of development at Central College in Pella, Iowa, and moved into the role of president a year later. At the age of 29, Lubbers was the youngest college president in the country. While in this position in 1962, Life magazine named him among the top 100 American leaders under 40 years of age.

In 1968, Lubbers  began a long tenure as president of Grand Valley State University (GVSU). Under his guidance, the university grew tremendously, expanded the number of educational programs it offered, and created a regional campus in Holland. Lubbers served as president of GVSU for 32 years, retiring in 2001 as the longest-serving public university president in the nation. Lubbers guided the transformation of a small liberal arts college into the fastest growing institution of higher learning in Michigan.

Lubbers has a passion for community building and engaged that passion throughout his presidency at GVSU. Through interactions with the West Michigan community, Lubbers learned that people are community oriented and that being a part of a community gives people a greater purpose for what they are doing. This philosophy fit very well with the philanthropic sector. Lubbers reflected, “as soon as a society understands and commits to philanthropy, they will find themselves enriched and changed by it.”

Lubbers led GVSU’s application to the W.K. Kellogg Foundation to launch a new academic center focused on philanthropy. Prior to the launch of the center, several major donors and foundations realized they needed more information and data regarding the nonprofit organizations they supported. To meet this need, GVSU, along with the Heart of West Michigan United Way and the Grand Rapids Community Foundation, collaborated to form the Direction Center. The Direction Center provided management aid to nonprofits and research to give donors more information regarding how their money was being used.

This initial response to the needs of the nonprofit and foundation community provided a sound basis for GVSU to apply for the competitive Kellogg Foundation grant. President Lubbers explained that Grand Valley was an institution founded through community leadership. With this, it was a natural fit for the philanthropy center to be located within Grand Valley to strengthen the university’s work on philanthropic and nonprofit research, management, and curriculum. GVSU received the Kellogg Foundation grant in 1992 to launch the Center for Philanthropy and Nonprofit Leadership, in part, because of the commitments made by the university. These included matching the Kellogg grant with $922,000 in university funding (and continued annual financial support).

“Often initiatives like that [creating the academic center], when you are trying to get them started, a university will place them in an existing structure. That is usually fatal because that structure already has its purpose and understanding and interests, and it is pretty hard to do it. That is why we started a new kind of curriculum, separate from what existed, and a new kind of research capability and consulting capability, which was outside of anything that existed. I think that helped it to grow and sustain itself.”

When Dorothy A. Johnson announced her retirement as the long-time CEO of the Council of Michigan Foundations, individuals who were involved in foundations, and who served on the university’s board of trustees wanted to honor her remarkable achievements and impact on Michigan philanthropy. Lubbers recalled that it was quite natural to look at Grand Valley as the place to honor Johnson due to her connections with the university. In 1999, the center was renamed the Dorothy A. Johnson Center for Philanthropy. In addition, CMF donated its library, built over 27 years, to form the heart of GVSU’s philanthropic collection — the Dorothy A. Johnson Collection on Philanthropy & Nonprofit Leadership. The center received an endowment to support the maintenance and growth of that library collection in perpetuity.

It was President Lubber’s entrepreneurial energy, close ties with the greater West Michigan nonprofit and foundation communities, and his willingness to take a risk in committing to a formal academic center on philanthropy that brought the center to GVSU. Other universities in the state of Michigan had longer histories, substantial scale, greater national prestige, larger graduate and research programs, and greater financial resources. GVSU, under Lubber’s leadership, had deep community roots, aspiration, and commitment to new ideas — qualities that put it in sync with the values of the greater Michigan philanthropic effort.

Lubbers was interviewed regarding his insights and experiences in working with Michigan’s philanthropic community and the Our State of Generosity (OSoG) partners. The following quotes specifically relate to the five organizing themes of the OSoG project.

“I always admired him [Dr. Russ Mawby] because he was always trying to make the Kellogg Foundation significant, without caring very much how significant he was. He never used all of that vast amount of money to aggrandize himself as some foundation executives do. He just used it to do what he wanted to do and he was always interested in philanthropy. That is my first memory of him as interested in encouraging philanthropy, not being a head of a philanthropic foundation, but wanting everybody to get involved in philanthropy. Because he understood, and this was an understanding that I shared with him — that America is unique and that philanthropy has always propelled the American agenda and philanthropy was going to change, as everything changes, and there were going to be new demands and new sources for philanthropy. Russ understood all of that and he was trying to create the pattern for philanthropy in the future of America and how it was going to support America’s future as it had its past.”

“A leader really needs to live with ambiguity. You have to be able to live with ambiguity. You have to realize that your responsibility, your first responsibility, what you’re getting paid for, is to make the institution run right, not necessarily make every one of your convictions and beliefs be put on the table and say, ‘Hey, this is what I believe and I’m the leader and this is what we should do.’ Or, ‘I think those people are wrong.’ Once in a while, of course, moral judgments must be made, but I think the leader, particularly in higher education, has to be very careful of how he makes them. His moral obligation is to students and faculty and staff, who all are dependent upon that institution and therefore the path for that institution must be the path that leads to the greatest success of all those involved and so that is why sometimes the leader has to finesse things, maneuver a little bit, just to keep conflict from being destructive.”

“There are many people doing good work within an institution. They are not particularly interested in another kind of good work. Their agenda is full; they don’t need it. So, no, you don’t always get a lot of support and then any time something new comes in [people ask], ‘How much is it going to cost? Is it going to cost us money?’ Well, of course when Kellogg came in with a big grant — that allayed that fear. On the other hand, we put some significant money into it before Kellogg did and that was why Kellogg did, I think. I just did some of those things, and there were others like the provosts and the team — the administrative team always could see the point of it and so we never had any real internal hassles over some of those new programs or those initiatives, and then we would kind of quietly just go about doing them.”