David Campbell helped launch the Michigan Community Foundations' Youth Project as one of the first youth advisers for the Community Foundation of Southeastern Michigan. Campbell was engaged in creating, developing, and mentoring a number of philanthropy projects including serving as a founding board member for the national launch of Learning to Give. As president and CEO of the McGregor Fund, Campbell provided ongoing leadership in a number of volunteer and board roles with Michigan infrastructure organizations, including service as chair of the Council of Michigan Foundations’ board of trustees. 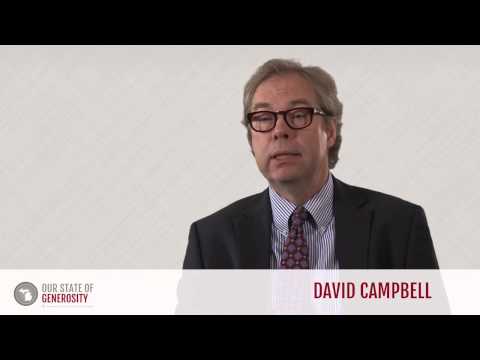 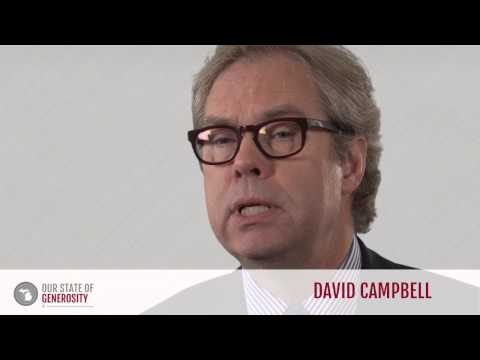 David Campbell talks about how fearless leadership allowed for the success of the New Economy Initiative. 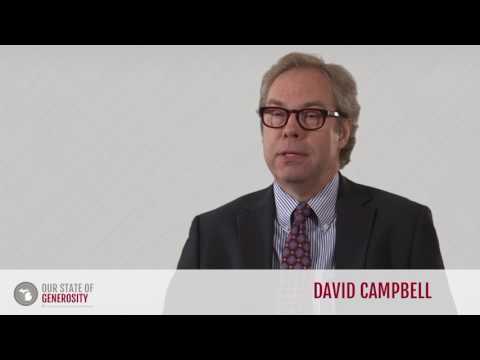 Mr. David Campbell talks about attending a youth retreat and watching the students get to know one another and share their stories. 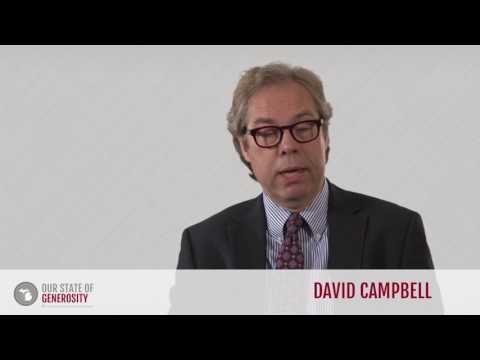 Mr. David Campbell talks about how serving on a Youth Advisory Committee can impact a young person's life. 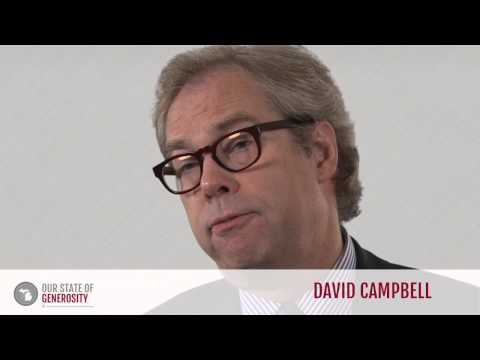 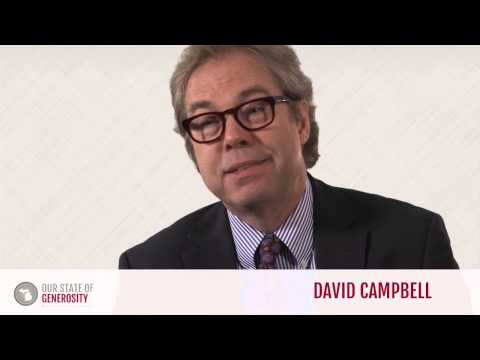 Mr. David Campbell talks about how a nonpartisan stance toward common good and trips to Washington strengthened Michigan's philanthropic sector. 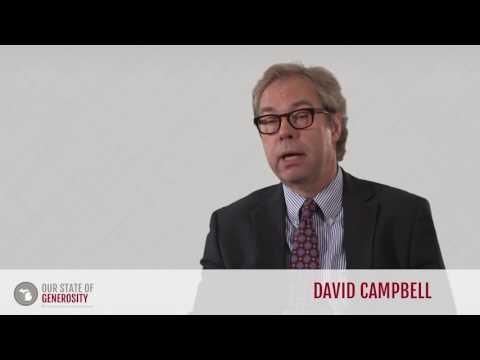 Mr. David talks about the development of the Michigan's Office of Foundation Liaison. 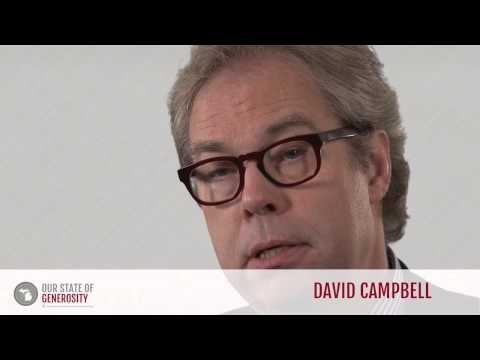 Mr. David Campbell talks about how CMF worked well because they focused on the big picture rather than individual interests. 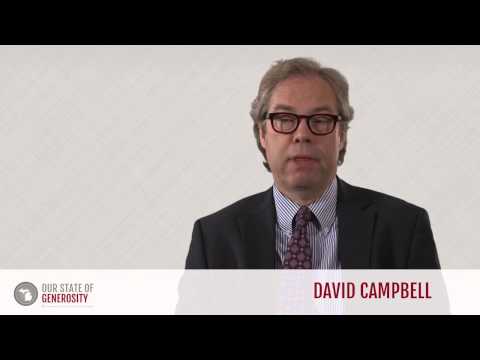 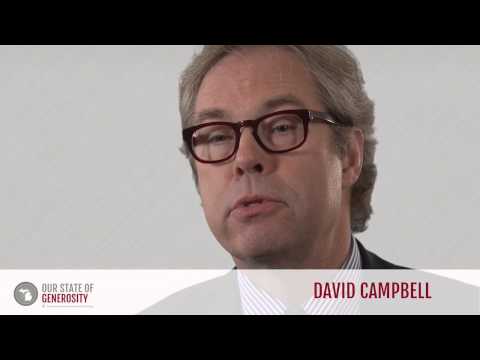 Mr. David Campbell talks about how Michigan's philanthropic success stems from fearlessness on the part of leaders like Russ Mawby and Dottie Johnson. 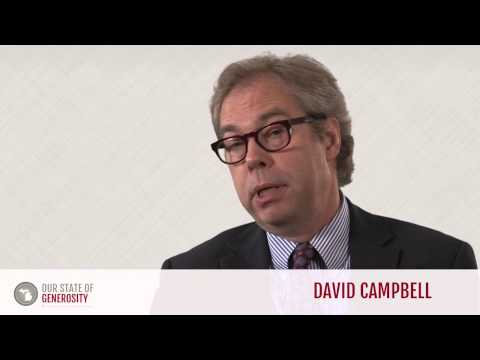 Mr. David Campbell talks about his career in philanthropy. 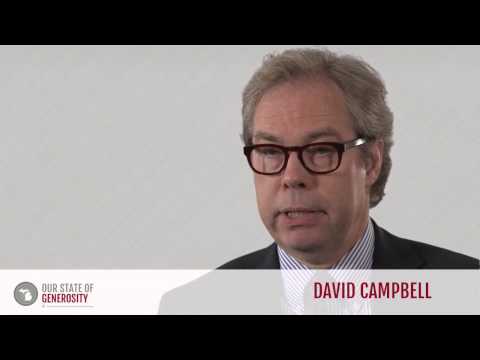 Mr. David Campbell talks about how effective leadership comes in many styles. 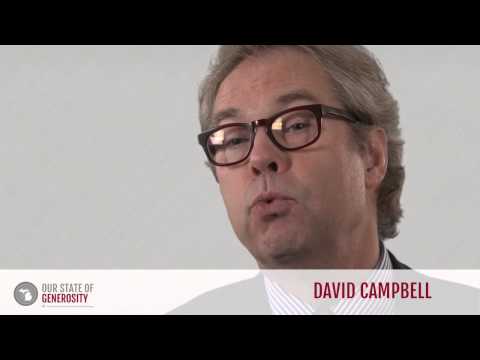 David Campbell graduated with a Bachelor of Arts in 1975 from Alma College, and earned a Master of Arts from Central Michigan University.

Campbell’s first experience with philanthropy was with his church’s youth ministry while growing up in Midland, Michigan. An interest in philanthropy was further spurred during the time Campbell spent working with college youth as a student affairs administrator at Alma College and the College of Creative Studies in Detroit. Campbell worked not only with student organizations on campus but also within the Detroit community. Based on this community involvement, former Detroit Mayor Coleman Young appointed Campbell to the Citizen’s District Council. This appointment was his first experience serving in a nonprofit leadership capacity.

In 1986, Campbell served as the first program officer for the newly organized Community Foundation for Southeastern Michigan (CFSEM) and later as vice president of programs. CFSEM is the largest community foundation (as measured by assets) in the state, serving seven of Michigan’s most populous counties. While at CFSEM, Campbell was one of the first community foundation program officers to implement the Michigan Community Foundations’ Youth Project — a matching grant challenge that provided up to $1 million for Michigan community foundations — and a Youth Advisory Committee (YAC). Campbell spearheaded the task of shaping what a YAC would be. For example, how would youth be recruited, how would it be organized, and how would it function? This first YAC became a model throughout the state.

“Philanthropic leaders of Michigan have always been willing to take big chances. That is not to say that they are crazy chances; they are pretty carefully thought through. I think another thing that has really made a difference is that in Michigan, as we have started down the path of adventure, if we find ways to improve it, people have never been afraid to step back and say, ‘Oh, you know what? Let’s go this way, we can we can be more effective this way.’”

Campbell played a critical role in establishing the Office of Foundation Liaison (OFL) in the state of Michigan. This office fulfills an essential role in the state government, helping educate state politicians about the role and needs of Michigan philanthropic entities and how public policy affects them. Campbell and David Egner, then CEO of the Hudson-Weber Foundation in Detroit, were inspired to start such an office on a state government level after observing the success of the new Office of Foundation Liaison’s office within former Detroit Mayor Dennis Archer’s cabinet. “We were telling [Governor-elect Jennifer Granholm] … how helpful that had been for providing a forum for foundations and city government to sit down and talk to each other and look for areas where we could work together — and also make sure that we weren’t working at cross purposes, which could sometimes be the case,” said Campbell. With Gov. Granholm’s encouragement, Campbell and Egner worked to raise funds from Michigan foundations to make the OFL possible.

Campbell co-chaired the planning committee for LearnPhilanthropy, which launched in 2010 with support from foundations across the nation. LearnPhilanthropy is an online hub of learning resources designed to help grantmakers of all kinds — staff, donors, trustees, volunteers — find and share resources, ideas and insights on best practices. As co-chair, Campbell shaped the vision for LearnPhilanthropy from its inception and helped build support across the field, providing critical leadership until the program found a permanent home at the Dorothy A. Johnson Center for Philanthropy.

After CFSEM, Campbell served as president and CEO of the McGregor Fund, and as founding member of the Learning to Give national board, until his death in 2014 (Welch, 2014). In addition, he served on the Council of Foundation board from 2004 to 2011, and the Council of Michigan Foundations board from 1995 to 2004, including two years as its chair from 2001 to 2003.

Campbell was interviewed regarding insights and experiences in working with Michigan’s philanthropic community and Our State of Generosity (OSoG) partners. The following quotes relate to the five organizing themes of the OSoG project.

“When I came into the field of philanthropy, I was amazed at how foundations were willing to collaborate. Foundations have very different missions from each other, they have different leadership styles. And yet, in Michigan, there has always been a willingness to work together, to collaborate. I think it has largely been the type of leadership that we have had in Michigan.”

“Regardless of what form [leadership] takes, leaders are thinking about, ‘How can the world be made a better place? How can we work together in creating that?’ Certainly, that is the case with philanthropic leadership. It is about sharing that vision and helping others to see that and understanding the visions that others have, and then being able to organize the resources to make that happen.”

“[Dottie Johnson and Russ Mawby] have really dared to dream things and implement things that have never been tried anywhere else in the country. It has been exciting to watch as Michigan becomes the role model for so much of the rest of the country in terms of things like the [Michigan Community Foundations’ Youth Project].”

“There are so many regional associations around the country that have maybe 100 members and they have just never been able to build the sort of momentum that Michigan has.”