For many years the Michigan Community Foundations’ Youth Project [MCFYP] and the Giving Indiana Funds for Tomorrow [GIFT] initiative were the only two projects of their kind. The programs had a statewide vision for community foundation service, had similar values regarding honoring local donors and community leaders, and were engaged in hands-on, in-the-community technical assistance and training. For these reasons, a very close working relationship developed between the staff of MCFYP and of GIFT. Shared resources, mutual support and idea sharing, joint publications and training, were all part of the close relationship. Helen Monroe has a long-time, national perspective on community philanthropy, knows Michigan foundation leaders, and worked closely with Michigan professionals for many years. 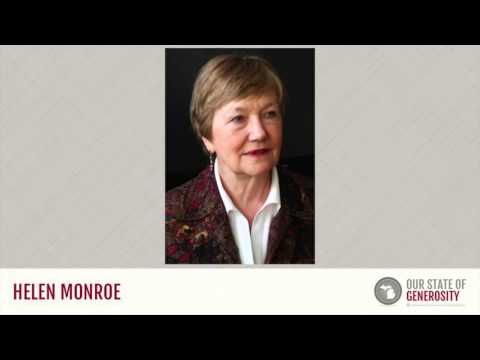 Ms. Helen Monroe talks about the development of the Giving Indiana Funds for Tomorrow (GIFT) program. 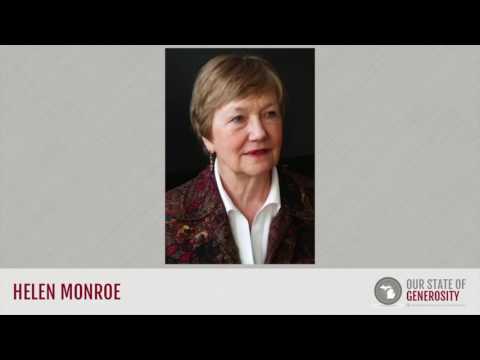 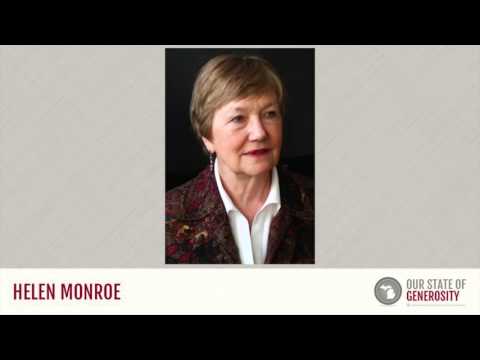 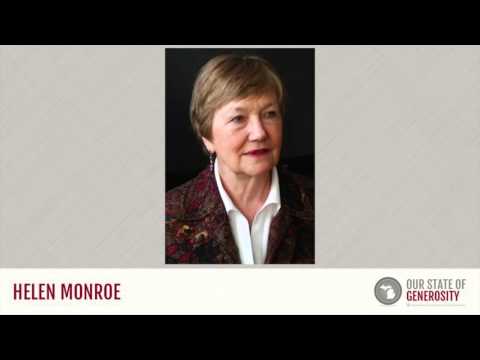 Ms. Helen Monroe talks about her career in philanthropy.

Helen Monroe graduated from Chatham College in Pittsburgh, PA., with a Bachelor of Arts in art and French in 1963. She earned a lifetime teaching credential at University of California at Berkley in 1965.

Helen Monroe’s first introduction to philanthropy came from watching her parents consistently engage with the community as volunteers. Whether it was sewing layettes for local children or supporting the war effort by bottling blood, her parents were strong examples of the importance of volunteering and giving what one could.

Monroe began volunteering at a local hospital during summer breaks in junior high with a group of friends. She continued this practice in college, giving of her time as a Sunday school teacher, and facilitating story time at the local library.

Helen Monroe began her career in the sector serving as executive director of the San Diego Community Foundation for 10 years, during which time the foundation’s assets increased from $1.5 million to $75 million.

Monroe related, “ … We had initially thought 20 [community] foundations would be a huge success, [but we] had 20 active starts within six months of the launch of the first announcement. That led us to believe that there was much more interest and potential around the state.” To date, the Lilly GIFT initiative has helped develop over 90 community foundations in Indiana (2017), and has become a model used across America in encouraging the growth of community foundations.

In addition to national work in the field, Monroe worked with community foundations in Britain, Poland, Canada, and Mexico. She started the Pacific American Community Foundation (now the International Community Foundation) in 1991, which is committed to fostering lasting philanthropy in Mexico and Latin America by connecting U.S. donors interested in international giving with local community needs.

Monroe was interviewed regarding her insights and experiences in working with Michigan’s philanthropic community and the Our State of Generosity (OSoG) partners. The following quotes specifically relate to the five organizing themes of the OSoG project.

“I think that common characteristics among those outstanding leaders would be their openness to sharing, their actual promotion of sharing, and spreading a good idea. I think it would be their absence of any personal, stature seeking, or recognition. They are all selfless people in that respect; that has not always been the characteristic of leaders of some of our councils and I think that makes a tremendous difference.”

“Success, when we all first started, was sort of the rising tide lifts all boats, and it wasn’t a competition.”

“I think that the successful programs that I’ve been affiliated with, the big resource funders, have thought of themselves as partners.”

“As times get tough, money gets tight and funding may be drying up from all kinds of sources. They’re going to have to pay better attention to running the business, and I think that’s wonderful. I think it’s about time we tell board members of our nonprofits to not check their business heads at the door when they come in.”