Jack Hopkins provided strong leadership for many major projects developed by the Council of Michigan Foundations (CMF) during his tenure as president and CEO of the Kalamazoo Community Foundation (formerly the Kalamazoo Foundation), a founding member of CMF. Hopkins furthered this commitment by offering leadership in assisting with the implementation of statewide projects that represented a bigger vision for the field as a whole. Hopkins was deeply engaged with CMF as a representing community foundation member and as a board member. 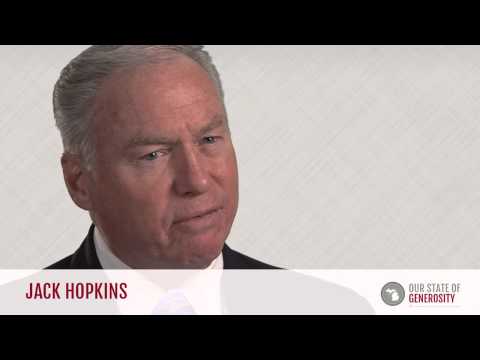 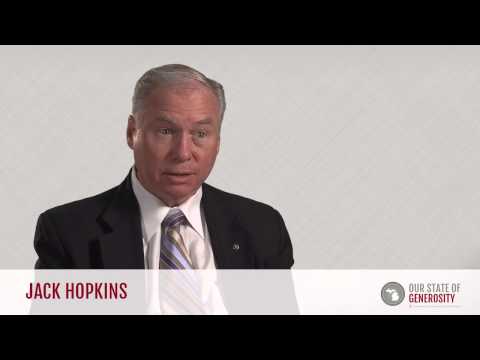 Dr. Jack Hopkins talks about how the Council of Michigan Foundations (CMF) created a philanthropic culture of "we're all in this together." 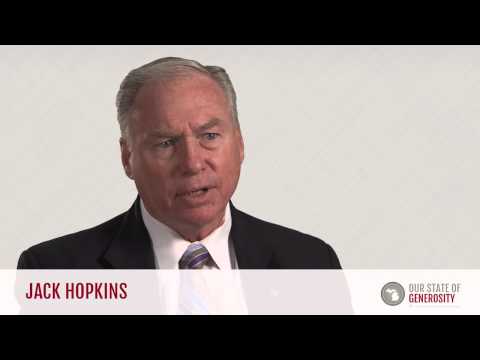 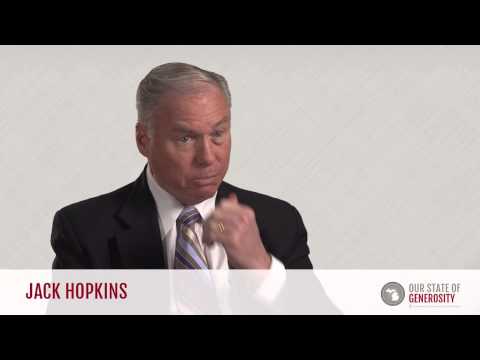 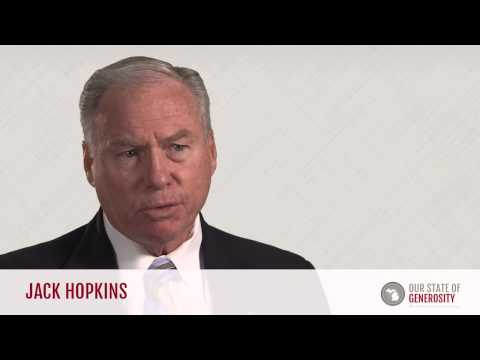 Dr. Jack Hopkins talks about how the Kellogg Foundation's partnership with the United Way promoted youth philanthropy and later the Michigan Tax Credit. 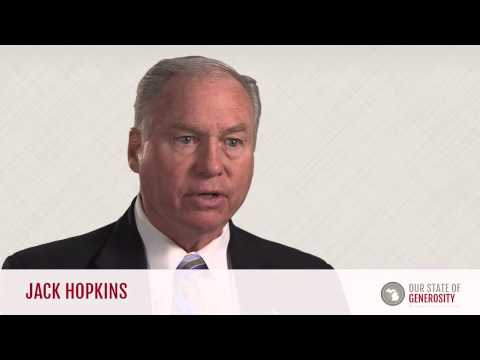 Dr. Jack Hopkins talks about the adoption of the Foundation Information Management System (FIMS) by the Kellogg Foundation. 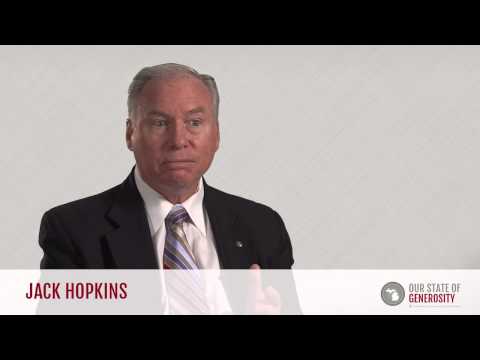 Dr. Jack Hopkins talks about how the Branding Project caused 60-year old community foundations to change their names for the betterment of all foundations. 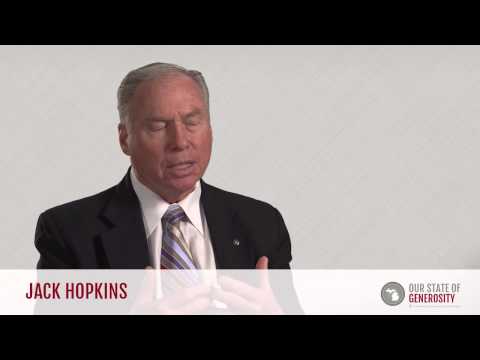 Dr. Jack Hopkins talks about how important building permanent endowments has been to the mission of the Council of Michigan Foundations (CMF). 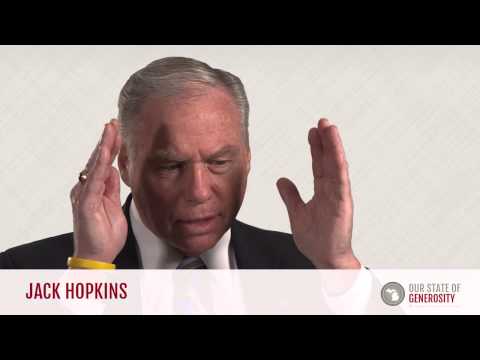 Dr. Jack Hopkins talks about his career in philanthropy.

Jack Hopkins graduated from Marietta College in Ohio with a Bachelor of Arts in speech and theater. While there, Hopkins participated in both the forensic and theater programs, and won the competitive Jewett Prize for excellence in oration skills.

Hopkins pursued both a Master of Arts and a doctorate at Ohio University studying interpersonal and organizational communication, with minors in radio/television and journalism. While working toward a doctoral degree, Hopkins was an instructor in the College of Communication.

Growing up, Hopkins’ father worked at the White House as a civil servant for 40 years, and his mother was involved in the community through the Girl Scouts and church. However, Hopkins does not view himself as having a background of volunteerism and philanthropy during childhood. Instead, Hopkins identifies time spent in higher education as an introduction to the field of philanthropy.

After receiving a doctorate, Hopkins joined the faculty of the newly formed communications team at Hope College, and soon became its chairman. After fostering growth in that department, Hopkins was hired by Nazareth College, and served in a variety of positions for eight years, ending as president/CEO. This time in higher education taught Hopkins how to fundraise, and introduced him to many foundations that had funded some of the college’s programs.

One of these funders was the Kalamazoo Foundation (later rebranded as the Kalamazoo Community Foundation) run at the time by Howard Kalleward. After a brief discussion with Kalleward about plans to hire an assistant (through a national search process), Hopkins was encouraged to apply  and was subsequently offered the job. While taking it would mean entering a field he knew little about, a pay cut, and losing free tuition opportunities for his children, Hopkins accepted the offer and 2½ years later, became president and CEO. Hopkins immediately threw himself into learning about the field and the many roles that community foundations play:

“I had so much to learn, and I learned from day one the wide variety of issues community foundations are involved in. I used to say that I might wake up in the morning and the first thing on the agenda is we’re going to talk about the environment. The next hour it might be economic development, the next hour it may be homelessness, and the next hour it may be the arts and humanities. Every moment, I was learning something new about the community and the issues facing members of our community, and the passion, and the love people had to solve issues – but I had so much to learn.”

Hopkins worked at the Kalamazoo Community Foundation for 25 years, during which time the foundation played a leadership role in many statewide projects. This was due in part to the substantial assets of the foundation, serving a relatively small community, and the willingness of Hopkins and the board to take risks while supporting other foundations in their ideas and endeavors. During these 25 years, the foundation’s assets grew from approximately $38 million to $300 million, and in 2008, it was among the largest three community foundations in the country on a per capita basis.

One example of this aspect of his leadership was the introduction of the Foundation Information Management System (FIMS). The FIMS project aimed to create a single computerized system for Michigan’s community foundations. Despite the fact that the chief financial officer did not want to switch to FIMS, Hopkins saw value in working in partnership with the Council of Michigan Foundations (CMF), which had taken the lead on implementing FIMS at the rest of the major community foundations in Michigan. Hopkins felt that without the Kalamazoo Community Foundation’s backing, the project would fail, and so the foundation supported and adopted the system. FIMS, funded under the leadership of Joel J. Orosz, program director in charge of the Philanthropy and Volunteerism programming area at the W.K. Kellogg Foundation, was ultimately a success thanks to the hard work of many across the state.

As another example of his leadership, Hopkins brought the idea of the tax credit for community foundation gifts to CMF. He championed this idea to its successful conclusion, helping to negotiate the various challenges involved in passing major tax legislation.

“One, I’m not sure I ever had thought through how important the coming together and the support from the private foundation sector was, that we all stood together… But that was critical because those foundations were critical to the passage [of the 1969 tax credit]. They had a credibility that the community foundations did not have at that point in time in the history of our state. Secondly, I didn’t realize how long it would take. I thought I knew, but I didn’t realize we’d have to hire basically a lobbyist or a firm that would help us through the process, and how the waters changed daily in terms of who was supporting it, who wasn’t, what the questions were, and so on. The third was, all of a sudden, you’re in the public eye. That means that you could be criticized for your work and it takes just a ton of energy. The long-term benefits I think are worth it on so many levels, but you have to be prepared for it.”

Beyond his work at the Kalamazoo Community Foundation, Hopkins spent considerable time engaging with the state infrastructure organizations and acted as a board member and later vice-chair of CMF — a position he had left previously to become the chair of the leadership team at the national Council on Foundations at a time of considerable unrest among community foundations at the national level. Similarly, Hopkins served on the Midwest Community Foundation Ventures’ board before acting as its chair, and was a member of the community foundation committee for CMF.

Hopkins was interviewed about insights and experiences in working with Michigan’s philanthropic community and the Our State of Generosity (OSoG) partners. The following quotes relate to the five organizing themes of the OSoG project.

“I think as I’ve reflected upon it, servant leaders are not about themselves. This is not about your own career. It’s not about perhaps the legacy that you provide. It’s about the people in the community that you serve. I think that’s one of the most basic elements of it, and that’s pretty hard sometimes for young people to grasp as they are trying to develop a career.”

“I think it’s about helping people come together; it’s not about stepping out and trying to be a leader. It’s about serving other people and helping them realize their dreams and their aspirations. In philanthropy, we have lots of resources available, both human capital and financial capital. It’s trying to find a way to help use that capital in ways to support other people in their dreams, not to control it.”

“I’m not a believer so much that our communities are so unique; people are people, issues are issues. It’s probably a matter of scale, and we had so much to learn from other people. I felt that we were in some ways isolated if we just thought about our own community, or just about other communities in the state of Michigan. I think we learned an awful lot from our colleagues around the country.”