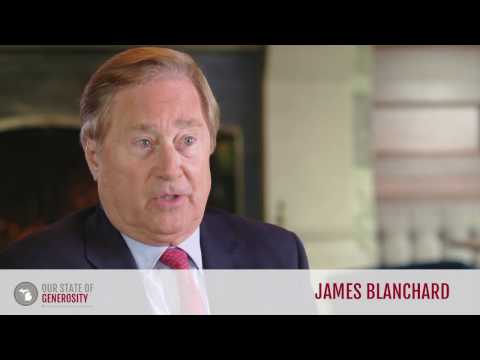 Governor Jim Blanchard talks about his career in philanthropy. 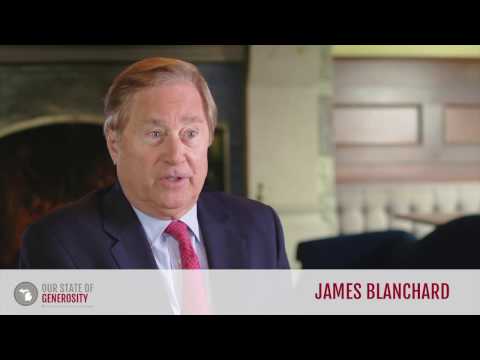 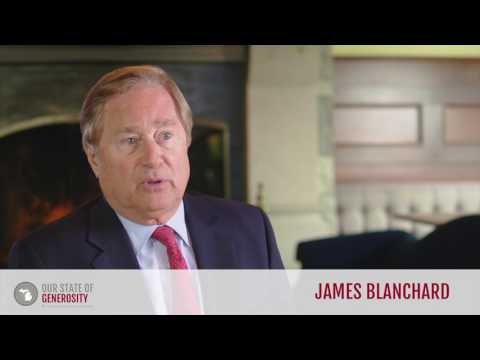 Governor Jim Blanchard talks about how creating the Michigan Community Foundation Tax Credit was in the interests of Michigan and the nation. 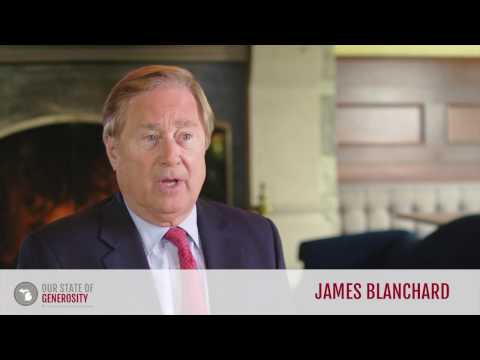 Governor Jim Blanchard talks about the impact George Romney, the 43rd governor of Michigan, had on Michigan's philanthropic sector. 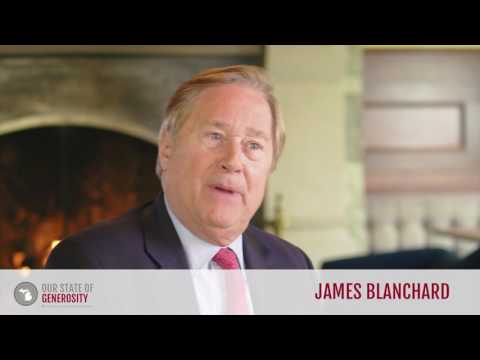 James Blanchard earned a bachelor’s degree in social science from Michigan State University in 1964, and a master’s degree in business administration in 1965. Blanchard graduated with a juris doctorate from the University of Minnesota Law School in 1968, and was admitted to the Michigan Bar that same year.

Blanchard served in various roles as a public servant throughout his career. Growing up in a family dedicated to service and activism, he saw early on the necessity of dedicating time and talent to those around him. He recalls his first encounters with service being through his church where around Christmas time people could provide gifts of service rather than material gifts. Blanchard’s family’s interest in politics influenced him to eventually run for office — first for class president at Michigan State University, later as a member of congress, and eventually as Michigan’s 45th governor. While in office, Gov. Blanchard was made aware of Michigan’s strong philanthropic presence by Dottie Johnson and Russ Mawby and demonstrated his dedication to service by establishing Michigan’s first Office of the Great Lakes and creating the Michigan Youth Corps and the Michigan Education Trust. After serving two terms as governor, Blanchard was appointed as the United States’ ambassador to Canada, for which he earned the Foreign Affairs Award for Public Service in 1996. Blanchard went on to serve on various boards and as a director of the John F. Kennedy Library Foundation.

For two years, the Council of Michigan Foundations had worked on legislation that would allow a tax credit for gifts to permanent endowments of community foundations. In 1988, Blanchard took action and signed the Michigan Community Foundation Tax Credit into law. The tax credit was vital in promoting the spirit of giving in Michigan; it inspired donors from households and businesses of all sizes to give to their communities and provided them with a tax credit based on what they were able to give. In its first year alone, the credit produced more than $2 million in funds that went directly to foundations all over Michigan. This increase in donations had manifold effects, including the development of Venture Products Fund in 1995 to help support marketing efforts on behalf of community foundations needing new resources to promote their efforts.

Although the tax credit was repealed in 2011 to help reduce the state’s budget deficit, its effects are lasting. Montana, North Dakota, Iowa, and Arizona have all instituted a tax credit for community foundations based on Michigan’s. This national influence proves Blanchard’s dedication in promoting Michigan as a model state of generosity.

Beyond legislative work with the tax credit, Blanchard worked tirelessly while in office to improve the economy, job market, and standard of living in Michigan. During his tenure, he instituted the state’s first Office of the Great Lakes, which promotes the health and wellness of the lakes surrounding the state of Michigan — the office improves the fresh water resources Michigan residents rely on constantly and helps harbor a healthy ecosystem for the animals that reside in the Great Lakes.

Gov. Blanchard was challenged by leaders such as Dottie Johnson and Russ Mawby to recognize and act on Michigan’s unique and strong philanthropic presence. In 1983, he responded to this call to service by creating the Michigan Youth Corps which employed 25,000 young people in its first year. Youth were presented with community-service oriented jobs, such as picking up litter and working in retirement homes. This program not only provided an opportunity for employment, but also instilled an element of service in the hearts and minds of Michigan’s youth.

Blanchard recognized the value of private service, particularly through his alma mater Michigan State University. Blanchard endowed both football and basketball scholarships and is most widely recognized for creating the Spartan Statesman Award for Distinguished Public Service. In 2015, he and his wife Janet donated $1 million to MSU’s College of Social Science to institute the award, which is administered annually by the department of Political Science. The award, which includes the Jim Blanchard Public Service Forum, honors an individual who demonstrates outstanding public service. The award and lecture series serve as a way to involve and educate students about public service and provides students with an opportunity to engage with the most distinguished leaders the sector has to offer.

Blanchard served as chair of the Meridian International Center, a nonprofit organization with the goal of strengthening the United States and its leaders to become guides in meeting global goals to promote a positive future. Blanchard serves as chair & president of the board of directors of the National Archives Foundation, which encourages awareness of the country’s history and democratic processes.

James Blanchard was interviewed regarding his insights and experiences working with Michigan’s philanthropic community and the Our State of Generosity (OSoG) partners. The following quotes relate to the five organizing themes of the OSoG project.

“…they make it easy for you, the [Michigan] leaders. They lead by example. They make you feel good when you do something to help, whether it’s contributing financial resources or time or ideas or influence like lobbying for things. They make you feel good and they try to stay a little bit in the background, so that the people that they recruit to help you get some recognition as they are going about their service.”

“The nice thing about foundations, non-profits, charitable work, and community work is that people end up feeling that they get more out of it than perhaps the people they help… If you are able to do things because you want to do them, because you think they are important, that you are not forced to do them or you are not paid to do them, it just makes people feel really good about life.”

“They [Michigan leaders] made me clearly aware early in my tenure as governor that Michigan had her unique position in philanthropy… I thought to myself, ‘We can help leverage their activities to help build a better Michigan, a better quality of life.’ It can’t all be done by government. Our resources, as everybody knows, are limited. If you are the governor of the state, a great state like Michigan, a mega-state, and you could leverage their activity and help them, encourage them, that is really a good thing.”