James (Jim) Edwards was the fifth executive director of the Dorothy A. Johnson Center for Philanthropy at Grand Valley State University. Edwards brought experience and knowledge about human service needs, and in particular, the problems faced by young people, and paired that understanding with the academic rigor of the university. Edwards’ insights into Michigan’s philanthropic infrastructure and operation grew from the perspective of a professional who was relatively new to the state’s formal philanthropic structures – but who was informed by professional experience and academic scholarship related to philanthropy’s role in communities. 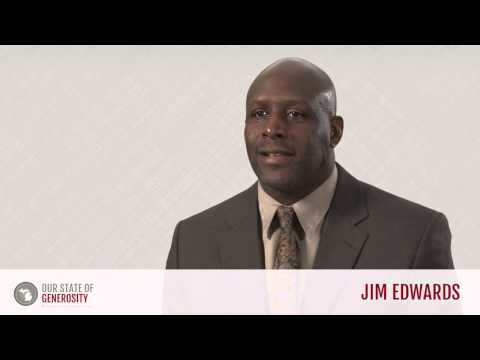 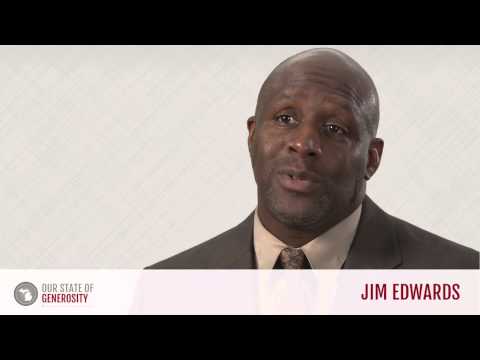 Jim Edwards discusses the history and impact of the Johnson Center for Philanthropy at GVSU. 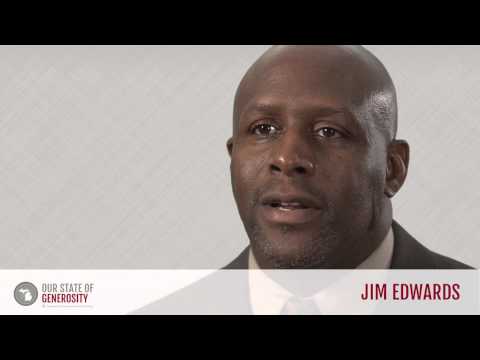 Jim Edwards shares advice on how to get involved and learn from Michigan's philanthropic culture. 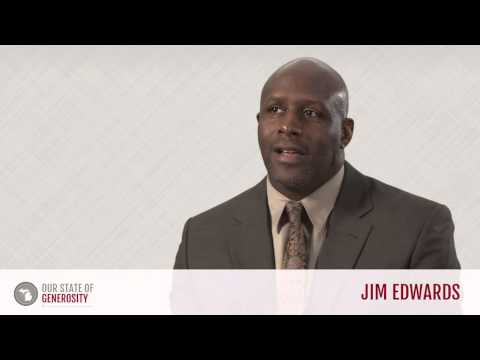 Dr. Jim Edwards talks about making the conscious choice to be a servant leader. 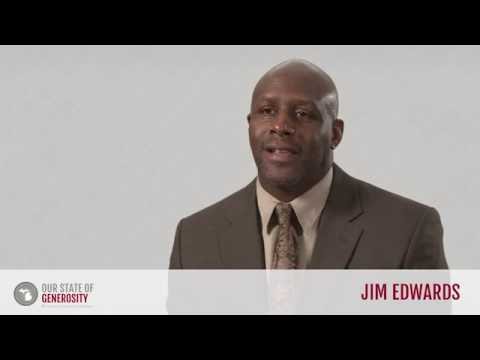 Dr. Jim Edwards talks about his career in philanthropy. 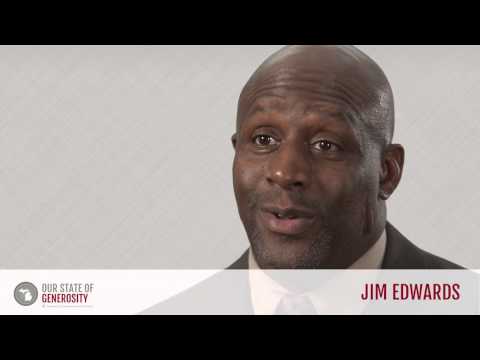 Dr. Jim Edwards talks about the importance of learning from those who came before you. 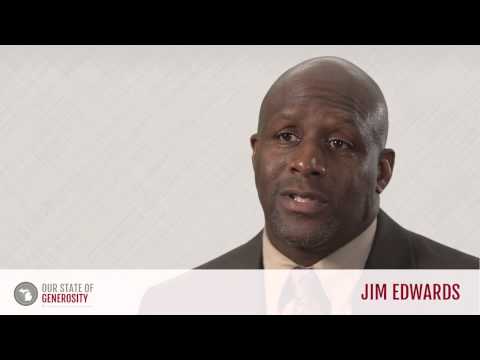 Jim Edwards graduated from Aquinas College in 1990 with a bachelor’s degree in sociology and psychology. Edwards earned a master’s degree from Western Michigan University, and a doctorate in social work from Michigan State University in 2009.

Growing up, Edwards witnessed his parents working toward degrees, thanks in part to the generosity of employers and scholarships, and their own work ethic. Seeing their dedication instilled in him the value of education and gave him first-hand experience how philanthropy, in the form of fellowships and scholarships, can help individuals and families. While attending Aquinas College, Edwards volunteered at a local mission’s kitchen, which he highlights as a period when his interest in philanthropy grew. Later, during his senior year, Edwards worked with abused and neglected youth and teen sex offenders at Bethany Christian Services. Edwards identified this as a wonderful experience that allowed him to be both a role model and a friend to young people, and he continued to work with Bethany Christian Services for more than five years.

Continuing service to the young people of his community, Edwards worked as a probation officer for habitual offenders in juvenile court. His education in psychology brought him to believe that many of those children needed mental health counseling. Edwards was outspoken on this topic which led to a position as the first juvenile court liaison for the mental health system. After the funding for that position concluded, Edwards worked as a contract manager and an intern mental health clinician, then the program director of the Network 180 Access Center for Mental Health and Substance Use Services for Kent County.

While at Network 180, Edwards found that many of the college volunteers and employees were unprepared to work in the field. After discussing this with some of his colleagues from Grand Valley State University, Edwards was encouraged to apply for a teaching position and was hired as the director of field education — a position he held for six years. During this period Edwards completed dissertation work at Michigan State University and became assistant professor in the School of Social Work.

Much of Edwards’ early career was spent acting as an advocate and mentor for the young people in his community, particularly those who were dealing with the juvenile court system and considered to be at-risk. He was a strong proponent for those with mental health conditions. This passion continued throughout his time at the Johnson Center, as he was heavily involved in a number of projects concerning these issues. Edwards was a member of the executive team for the First Steps project in Kent County, which seeks to strengthen and coordinate early childhood services. He also was involved in the creation of a Juvenile Justice Vision 20/20 unit at GVSU, a member of the Association of Black Foundation Executives, and a board member for the Grand Rapids Public Library. In 2014, the Grand Rapids Urban League awarded him their highest honor, the Drum Major Award, thanks to his leadership in the topics of “social justice, diversity, changing systems, and providing opportunities for people to achieve their dreams”.

While director of CRI and as executive director of the Johnson Center, Edwards took a leadership role in many different projects at the local, state, and national levels. Edwards assisted in, and directed the creation of, CRI’s MAPAS tool — an interactive mapping and data application tool that makes local, state, and federal data including demographics, birth statistics, and crime statistics more accessible for foundations, nonprofit groups, government, and citizens. Edwards worked on B2B, a collaborative effort that uses grants and strategies to close the educational achievement gap in Grand Rapids, Michigan, and to encourage communities to take action in the support of children’s education. Edwards helped lead the implementation of this comprehensive foundation-funded program. This work required complex participant tracking, multi-institution collaboration, and sophisticated data management.

Nationally, Edwards served as board member and board secretary for the Nonprofit Academic Centers Council, as member of the leadership team for the Arizona-Indiana-Michigan Alliance, and worked with Leadership 18 (an organization of high-level executives who use their joint leverage to attempt to solve critical human development issues) in an advisory role.

“It is interesting because I get a couple of responses when I talk about being from Michigan. One is ‘Oh, you guys are great, you have this figured out,’ and the other is ‘Oh, not Michigan again. Another one from Michigan.’ So I think even in those begrudging comments, people are acknowledging Michigan as a leader in the sector. Not just in the amount of programs and the quality of the programs, but I think genuinely trying to contribute to the national dialogue and make things better across the country, not that we are just focused on Michigan. That’s what I hear, so when I hear people talking about Kyle Caldwell, Rob Collier, Dottie Johnson, or Kathy Agard, that’s the spirit that they’re talking about. These are people who worked in Michigan but were concerned about the sector.”

Edwards was interviewed regarding his insights and experiences in working with Michigan’s philanthropic community and the Our State of Generosity (OSoG) partners. The following quotes relate to the five organizing themes of the OSoG project.

“[Servant Leadership] is hard to quantify, but I do believe that [Michigan has a spirit of servant leadership] and I think there are several ways that I see that playing out. One is by the richness of opportunities to help others in the communities; that every community in Michigan seems to have something going on where they’re helping people who need help … I also see on the other side that professionals working in the field that have talent, and could work in different areas and make a lot more money and probably have a different lifestyle. But they made the choice that this is important and it’s important for who they are and their well-being and their values, and so they made the decision to consciously serve others.”

“Well I think for [working with people and their knowledge] it is just being around the table with people who are giving of their time to be around the table, and give their input into whatever it may be; whether it’s a leadership council, an advisory group, or on boards. To me, that’s been a tremendous opportunity for people to give their time and their knowledge. That human capital is extremely important to the sector.”

“We [the Dorothy A. Johnson Center] fit into the national picture as one of the largest philanthropic academic centers in the country, but also our focus on our Grantmaking School, our focus on our Foundation Review, which is all about disseminating information to the professional communities. So that has really been our niche at the national level.”