John M. Engler, Michigan's 46th governor, worked closely with the philanthropic community to build institutional support for giving and service. As a government partner, Engler pursued policies that encouraged citizens to financially support charitable activities and used the “bully pulpit” to advocate for private citizen action for the public good – in other words, philanthropy. Engler championed novel public/private partnerships such as a tax credit for gifts to community foundation endowment funds and a $20 million endowment to support volunteering, which is now known as the ConnectMichigan Alliance. Engler provided visionary leadership for the creation of one of the first state commissions on service, even before the establishment of the Corporation for National and Community Service. Engler worked with a number of the state’s leaders in philanthropy and was a champion for increasing and improving philanthropy in Michigan. 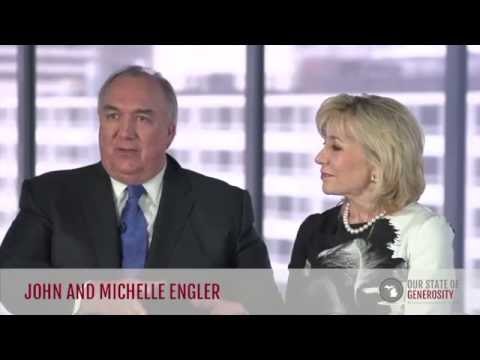 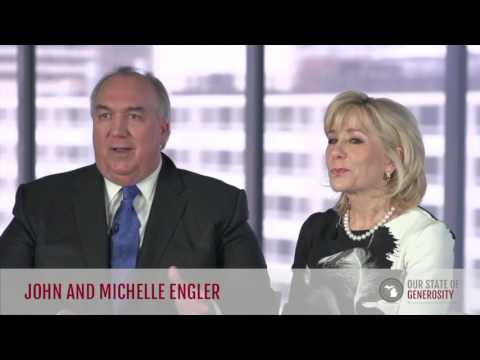 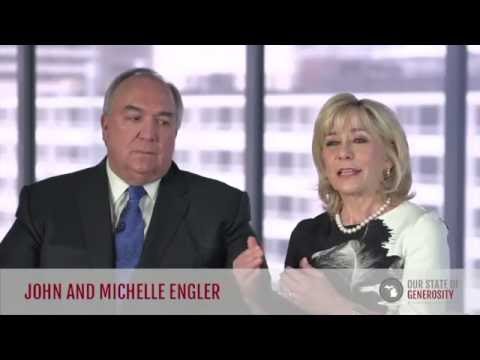 Governor John and First Lady Michelle Engler talk about the development of the ConnectMichigan Alliance. 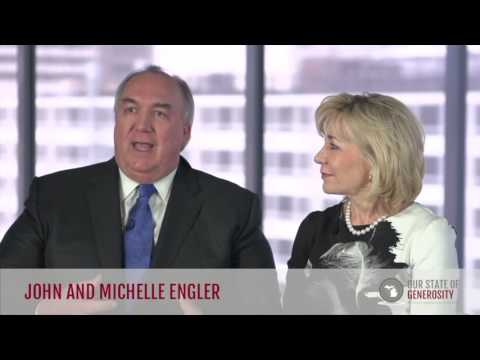 Governor John Engler talks about how George Romney, Michigan’s 43rd governor, spread volunteerism and community engagement across the state and the country. 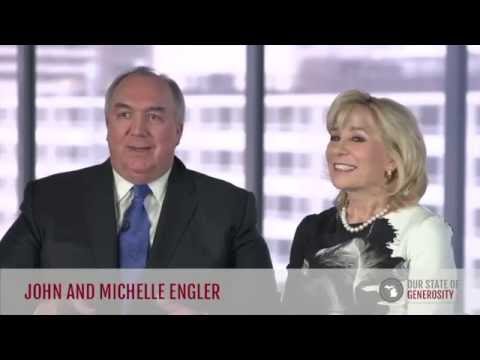 Governor John and First Lady Michelle Engler talk about how Michigan has benefitted from the efforts of selfless leaders. 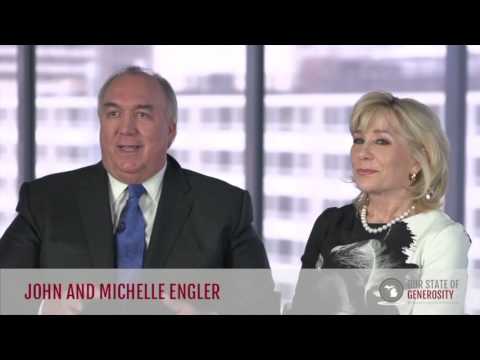 Governor John Engler talks about the value of having community members form their own foundation. 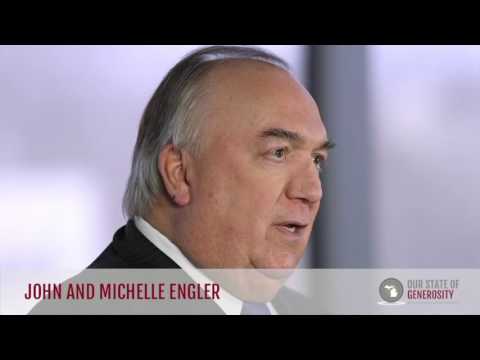 Governor John Engler talks about the expansion of community foundations across Michigan. 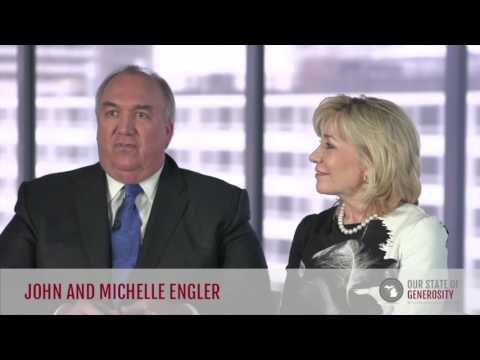 Governor John Engler talks about having a conservative approach to philanthropy. 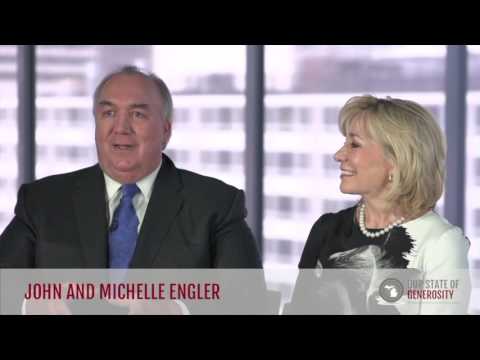 Governor John Engler talks about how most people, when given an opportunity, are happy to help. 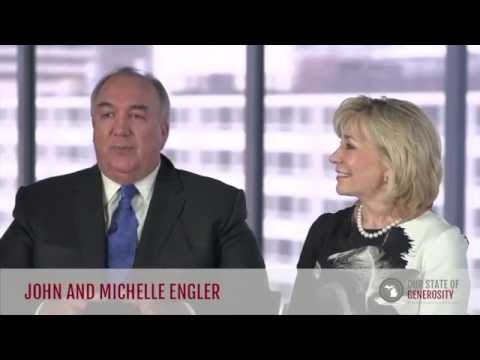 Governor John and First Lady Michelle Engler talk about their careers in philanthropy.

Gov. John M. Engler earned a Bachelor of Science in agricultural economics from Michigan State University, and a law degree from the Thomas M. Cooley Law School in Lansing, Michigan.

As the son of a farmer growing up in the 1950s, Engler saw how his father benefitted from participating in a rural leadership program offered by the W.K. Kellogg Foundation. As Engler became active in the political world, he continued to witness the generosity of the Kellogg Foundation and drew inspiration from the leadership of Russ Mawby – from the time Mawby led the 4H extension program at Michigan State University to his eventual leadership of the Foundation.

As Michigan’s elected governor from 1991 to 2002, Engler demonstrated a continuous presence as a philanthropic leader. Moved by the dedication of former Gov. George Romney, Gov. John Engler and First Lady Michelle Engler immersed themselves in Michigan’s philanthropy in various ways. In 1991, Engler signed an executive order to create the Michigan Community Service Commission, a partner organization of Our State of Generosity. In 1994, the governor signed a bill to make MCSC a statutory agency. Engler created many public/private partnerships throughout Michigan, including one with the Council of Michigan Foundations which used funds from the Michigan Tobacco Settlement to support community foundations and promote wellness for youth and seniors. Engler is responsible for the creation of the Volunteer Investment Grants, the nation’s first volunteer endowment program. Administered by MCSC, this program built endowments that increased volunteerism statewide and balanced community foundation funds.

During his tenure, Engler, with the help of First Lady Michelle Engler, turned the focus of community problem-solving away from government-only efforts and pointed it back toward the engagement of the hearts and minds of the people. This was accomplished through the creation of MCSC, which promoted volunteerism and activism in a way that united diverse members of the community along with private entities.

“The Community Service Commission was founded before we had a national structure. The Governor had put this instrument in place before there was a national movement for it; he was ahead of the curve. He understood that citizens had to engage.”
[Dave Egner, on the creation of MCSC]

MCSC instilled volunteerism in the community, but it also acted as a means to focus the genuine time, talents, and treasures of Michigan citizens. Ultimately, this served as a way to engage community members directly in solving community problems, and also created a way to use state and federal resources in support of volunteerism.

Engler’s spirit of giving transcended beyond the creation of MCSC, when in 1994 he expanded the Community Foundation Tax Credit program. This promoted giving for the common good and rewarded citizens for their contributions to their community foundations.

In 1999, Engler signed into law the Michigan Tobacco Settlement Partnership that acted as a way to distribute funds to 65 of Michigan’s community foundations to promote youth and senior wellness. Using money from the interest on the tobacco settlement revenue, this law funded programs that advocated for youth and senior wellness on both a local and regional level. These programs focused on health and nutrition, family counseling, childhood development, smoking prevention, and school programs. By signing this partnership into action, Gov. Engler provided otherwise unattainable resources to communities to promote healthy living.

Nearing the end of his administration, Engler provided Michigan with yet another testament to his dedication to philanthropy. With the executive budget, Engler initiated a $10 million challenge grant that was matched 1:1 by private donations from foundations, businesses, and individuals. Funds from both private and public sectors, along with the appropriate use of government resources, ultimately led to the creation of the $20 million endowment, ConnectMichigan Alliance (CMA).

The purpose of CMA is to ensure the continuation, in perpetuity, of funding for Michigan’s vigorous volunteerism and service sector. Although the establishment of CMA was an ambitious goal, funding was accomplished in full and continues to provide support for the sector, to this day. CMA functions under the Michigan Nonprofit Association, a partner organization of Our State of Generosity.

Engler was interviewed regarding his insights and experiences working with Michigan’s philanthropic community and the Our State of Generosity (OSoG) partners. The following quotes relate to the five organizing themes of the OSoG project.

“I always said that the greatest strength of Michigan was the people. The citizens who live there had a certain toughness and resilience that if you gave them a chance – if you gave them the opportunity – they’d show you what they could do. I think that’s true whether that’s in terms of getting the economy moving or in terms of solving community problems.”

“It wasn’t a Republican or Democrat or Independent kind of activity, didn’t have a label on it. It was just how do you do good, how do you leverage doing good to benefit the most people to impact the significant number of problems and challenges?”

“You’ve got the West Michigan philanthropy example – a whole community that literally has been vaulted to the top among mid-sized cities in the country because of private philanthropy. Michigan’s got a lot of good lessons for people to take a look at.”

“Replicating success, sharing success stories. Those are the kinds of things that you get kind of excited about. You see that people are learning from each other and, more importantly, maybe they’re inspiring others to get involved and it grows over time.”