John Lore served as an intern to the CEO of one of the largest private foundations in the world, the W.K. Kellogg Foundation. Lore led the development of the largest nonprofit hospital system in the world, Ascension Health. He served as chair of the national Association of Fundraising Professionals, and led a statewide public-private fundraising effort that secured $20 million endowment gifts to support volunteering in Michigan forever. Throughout his career, Lore was a highly experienced and valued member of the philanthropic leadership group working in the state of Michigan.Lore watched the development of philanthropy in Michigan from several vantage points, and actively participated in major efforts. 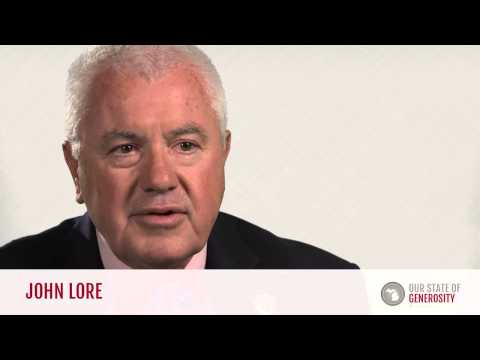 John Lore talks about the leadership styles of Russ Mawby and Dottie Johnson. 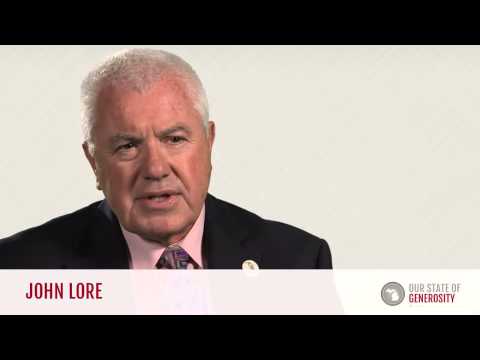 John Lore talks about the remarkable leadership of Russ Mawby and Dottie Johnson. 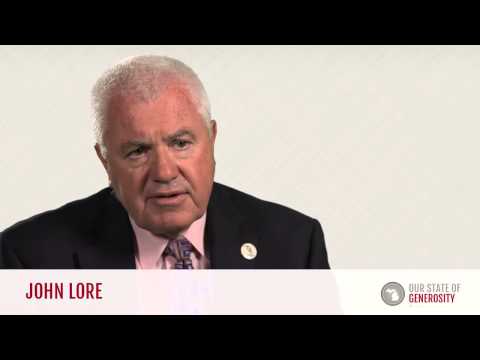 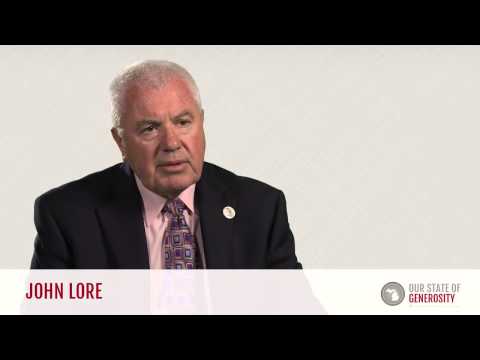 John Lore talks about the founding of the Council of Michigan Foundations. 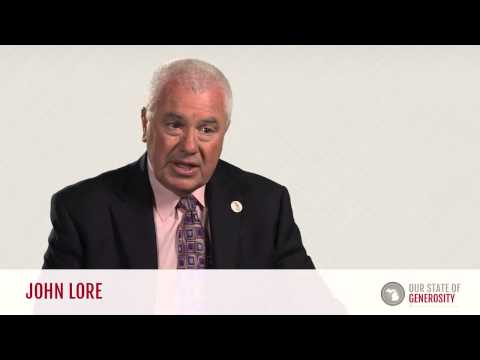 John Lore discusses the founding of the ConnectMichigan Alliance. 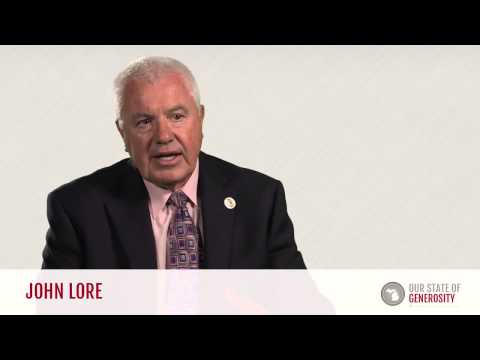 John Lore talks about challenges of starting the ConnectMichigan Alliance and successes achieved by the project. 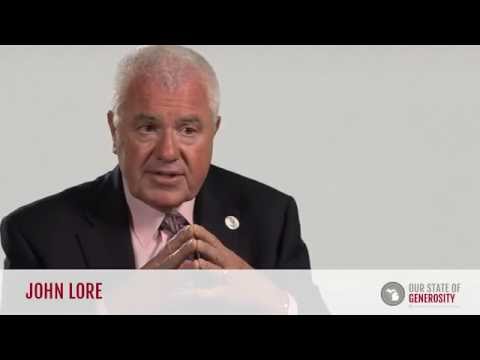 John Lore on the importance of a broader definition of philanthropy. 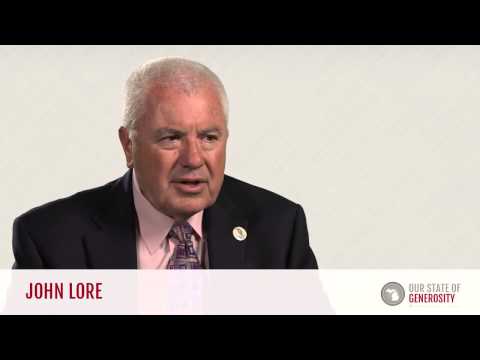 John Lore about being fearless in nonprofit work and "sensitive enough to be angry." 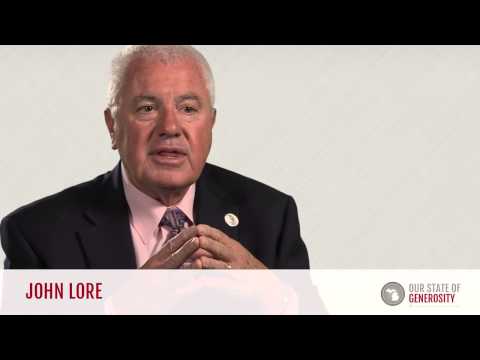 John Lore on the importance of preserving stories of Michigan's philanthropic leaders. 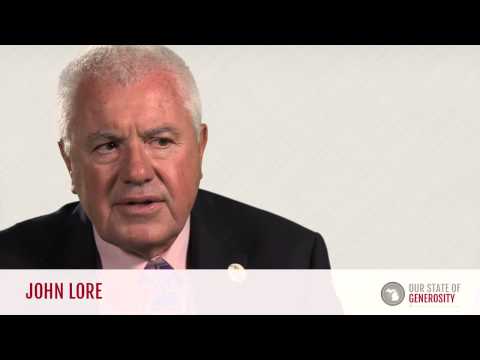 John Lore talks about his career in philanthropy. 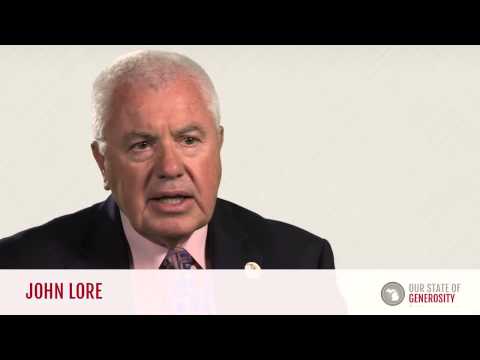 John Lore talks about the founding of the Michigan Nonprofit Association. 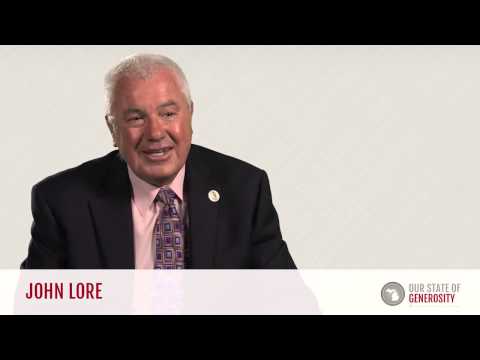 John Lore shares an anecdote about the founding of the Michigan Community Service Commission. 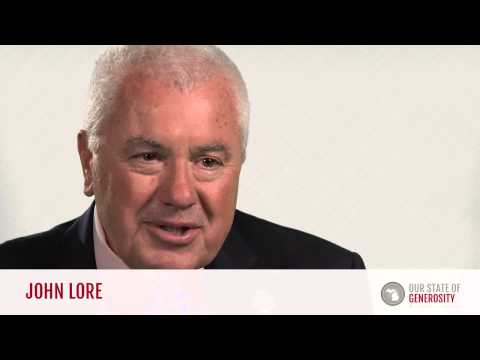 John Lore earned a Bachelor of Science in printing management and finance in 1965, a Master of Arts in leadership in 1967, and a Doctorate in Education in foundation leadership in 1974 at Western Michigan University .

Lore’s doctoral dissertation was on the impacts of the Tax Reform Act of 1969 on private foundations. The Tax Reform Act of 1969 was one of the defining public policy initiatives affecting philanthropic organizations in the United States. Lore’s understanding of the causes of, and consequences from, this federal regulatory legislation informed his career as a practitioner-scholar of the field.

John Lore’s first introduction to the importance of serving others came as a young child, when his own family received food supplies from the local Goodfellows nonprofit organization.

As a W.K. Kellogg Foundation intern in 1973, Lore worked closely under CEO Russ Mawby’s direction. During this time, Lore was introduced to the many facets of Michigan philanthropy and needs of foundations after the Tax Reform Act of 1969. This internship helped Lore transition from an observer to an active participant in Michigan’s philanthropic sector.

After that, Lore cited his time working with the Sisters of St. Joseph as “the most definitive part” of his life and philanthropic journey. As executive vice president (and later president and CEO) of the Sisters of St. Joseph Health System, Lore worked closely with the sisters and was impressed by the way they enacted their core value of servant leadership. This was a concept Lore carried with him throughout his career.

“Watching the Sisters of St. Joseph when they would be a head of a three billion dollar operation … the minute they left the office they went and served other people, brought coffee and so on. It was an incredible lesson to watch them. I was so fascinated with this thinking of servant leadership and how it manifested itself with these very learned, bright individuals and I enjoyed watching them. They could go from this great leadership where they were flying all over the place in private planes and then the next thing, they’re delivering coffee to a learning center. I’d never seen anything like it in my life. I thought, ‘You know, that’s a style that’s very important to me.’”

Lore was recruited by Russ Mawby to lead fundraising for what would become the ConnectMichigan Alliance (CMA). This movement was in response to a growing concern that Michigan’s nonprofit sector would struggle without a robust network of volunteers and an infrastructure to manage it. Many key leaders realized that such a network’s success would be greatly dependent on consistent public and private funding, which was uncertain at the time. This uncertainty was compounded by the impending conclusion of Gov. John Engler’s administration, and so a campaign began to create a permanent endowment to promote and strengthen a lifelong ethic of service and civic engagement throughout the state of Michigan.

This initiative sought to build and strengthen Michigan communities by supporting existing nonprofits through promotion of volunteerism, advocacy and public policy, training and technical assistance, and direct programming. By housing all statewide volunteer and service-learning initiatives under one administration, CMA aimed to increase capacity and effectiveness while decreasing overall administrative cost and burden of supporting nonprofits.

Gov. Engler championed the creation of a $10 million 1-for-1 challenge grant by the State of Michigan, which was matched by funding from the nonprofit sector (private, family, and community foundations), the for-profit sector (corporations and sole proprietorships), and individuals. Lore, along with the founding leadership team*, worked tirelessly to help raise funds for the matching grant. It was a truly unusual effort, fundraising for an organization that was not yet in existence. Lore’s leadership, along with the stature and experience he recruited to the fund-raising team, resulted in the unprecedented, perpetually endowed $20 million public-private partnership to assure that voluntary efforts would continue in Michigan.

An innovative and collaborative initiative, it was achieved through sector-wide collaborative selflessness, including the decisions of the Michigan Nonprofit Association and the Michigan Community Service Commission to move both programs and endowments to the developing organization. Lore was asked to serve as president and CEO of CMA after its creation in 2001. In addition to the endowment Lore had helped raise, CMA housed many initiatives that focused on supporting volunteerism, including the Volunteer Centers of Michigan, Michigan Campus Compact, and America’s Promise, which were previously supported by MNA. In 2004 Lore stepped down from his leadership role at CMA.

Prior to his involvement with CMA, Lore worked extensively within Michigan’s institutions of higher education and served as director of alumni and development at Western Michigan University from 1966 to 1972. He was president of Nazareth College in Kalamazoo (now closed) from 1972 to 1980, and president of the Michigan Colleges Foundation (now called the Michigan Colleges Alliance) from 1980 to 1986.

Lore served as president/CEO of Ascension Health from 1986 to 2000. During this time, he oversaw the merger of the Daughters of Charity National Health System and the Sisters of St. Joseph Health System to form the largest nonprofit health care system in the world. At his retirement in 2000, the system included 120,000 employees and roughly 100 hospitals in 36 states.

Lore served on multiple boards including Learning to Give and the Nonprofit Council (a precursor to the Michigan Nonprofit Association) during the early years of their development. He served as chair for the Association of Fundraising Professionals in Washington D.C. from 1993 to 1994 and was a driving force in increasing the professionalism of the fundraising field by advocating the need for mentoring.

[On mentoring] “I just would say to all of the others, ‘Mentoring is your responsibility. I don’t care how high you are in the organization. You can be a vice president of a great university and so on. You have a responsibility … you have to be mentors. It’s the only way we’re really going to build that strength and professionalism for the future.’”

Lore was interviewed regarding his insights and experiences in working with Michigan’s philanthropic community and the Our State of Generosity (OSoG) partners. The following quotes specifically relate to the five organizing themes of the OSoG project.

“This servant-leadership mentality that I learned through all of my involvement in the state of Michigan impacted a very large health system. We saw other examples of other systems that didn’t have that service mentality, so they weren’t supporting community and it caused some real challenges.”

“We’re one of the few states that understands the broader definition of philanthropy — not just fundraising, but volunteerism, not-for-profit leadership, servant leadership — that all comes under philanthropy. We were able to do that because of the enlightenment of the Russ Mawbys of the world and the Dottie Johnsons, etc. They represent all of us who are a part of it, a small part. They were a major part.”

“When you go out to build a laundry, it’s where are you going to build it to make the most impact and how are you going to really be a servant to community. This was a very interesting revolution throughout and it didn’t take long for all of our system to understand.”

“[Russ Mawby] talked about the importance of this equation with grantmakers, grant seekers, and the foundations that had the reserves and the resources. In order to bring those over to those in need in a legitimate fashion, you needed this combination … It was a thing that I never, ever forgot because I think, for the first time, not only in the state of Michigan but nationally, fundraising became a team effort.”

“You know, the history today with Michigan Nonprofit Association being in Michigan — this isn’t being braggadocio or chauvinistic by far — being a model for the whole country. You don’t find many philanthropic structures like this around the country.”

“Those grant seekers have to be as professional, as accredited, and as ethical as the organizations they serve and the foundations. That’s what I think really made Michigan different, and we all saw that.”

“What we did with Learning to Give, to me, says that we will secure the future. We will also make sure that what we’ve created here won’t stop. It’s going to continue.”