Julie Fisher Cummings is managing trustee of her family's foundation, the Max M. and Marjorie S. Fisher Foundation, headquartered in Detroit, Michigan. She served as board member and chair of the board of the Council of Michigan Foundations, represented family foundations in the state, and served as one of the founding commissioners of the Michigan Community Service Commission. She brings the perspective of an actively engaged, national-level volunteer to the understanding of Michigan’s philanthropic community. 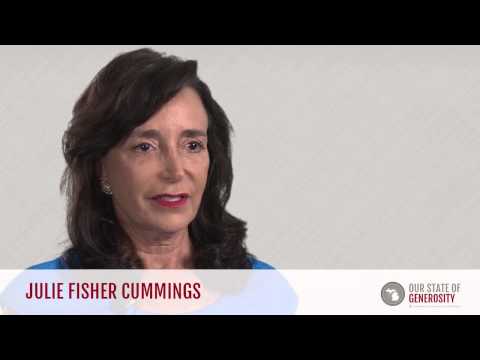 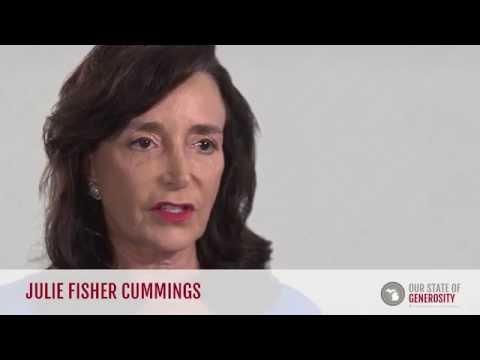 Ms. Julie Fisher Cummings talks about how family foundations are the "army on the ground" that see the value in investing in their local communities. 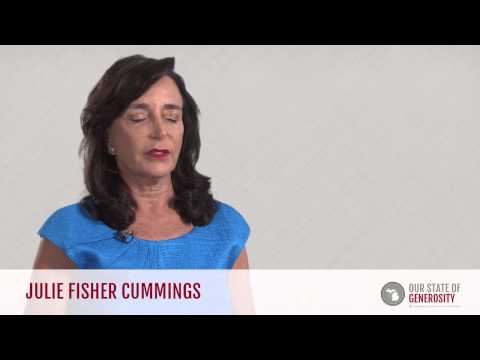 Julie Fisher Cummings discusses the challenge grant and the movement to grow community foundations across the state of Michigan. 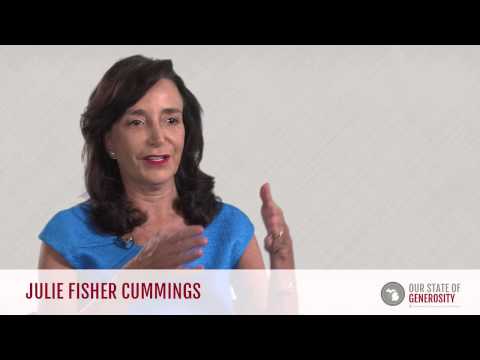 Ms. Julie Fisher Cummings talks about how fundamental the Council of Michigan Foundations (CMF) has been to the growth and success of Michigan philanthropy. 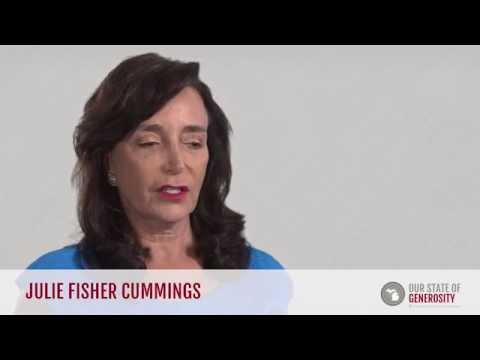 Ms. Julie Fisher Cummings talks about the value of "disagreeing without personalizing." 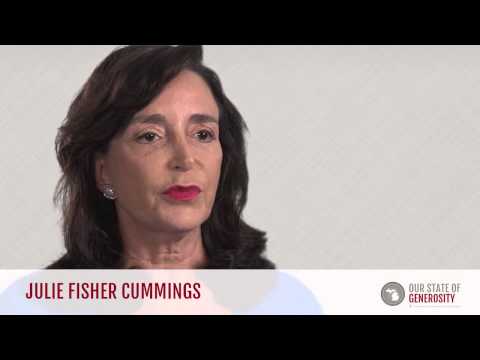 Ms. Julie Fisher Cummings talks about how Michigan philanthropy has embodied an ethic of servant leadership. 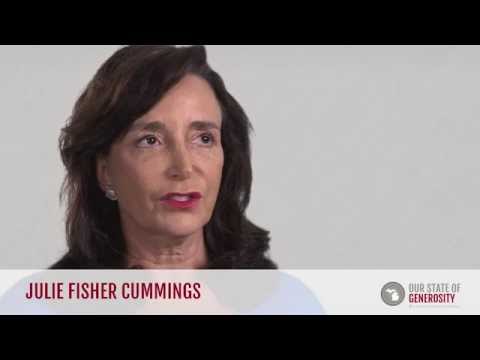 Ms. Julie Fisher Cummings talks about how all philanthropy is valuable and the importance of collaboration to ensure everyone has a good life. 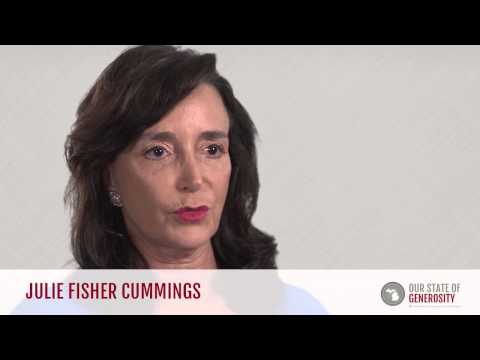 Ms. Julie Fisher Cummings talks about the importance of having volunteer infrastructure available to all. 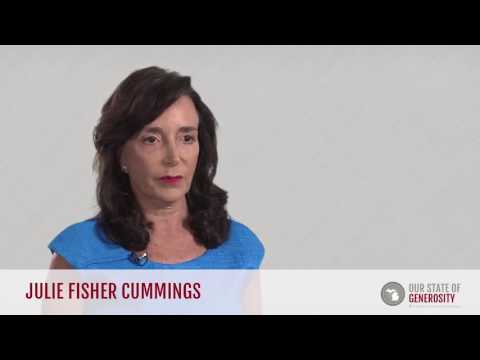 Ms. Julie Fisher Cummings talks about how important RAGS on the Hill was to the growth of Michigan philanthropy. 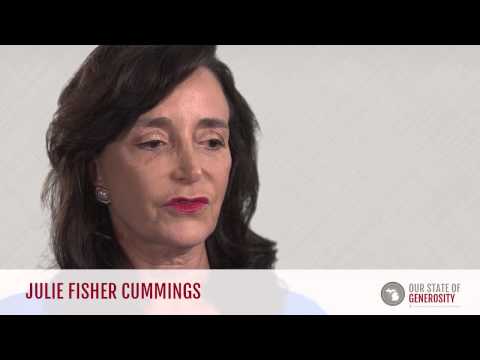 Ms. Julie Fisher Cummings talks about the mutual respect shared by legislators and philanthropists at RAGS on the Hill. 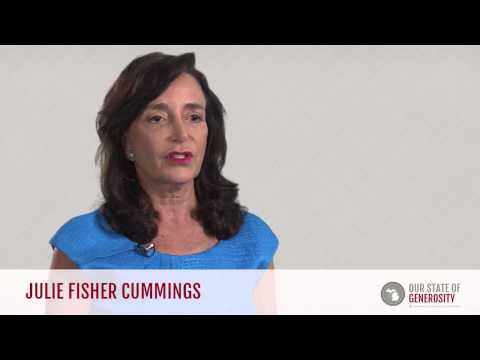 Ms. Julie Fisher Cummings talks about how she encouraged the implementation of youth advisory committees (YACs) in community foundations outside Michigan. 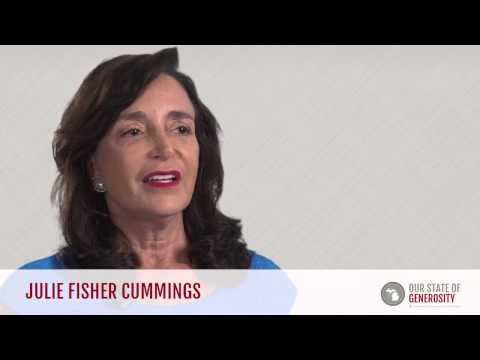 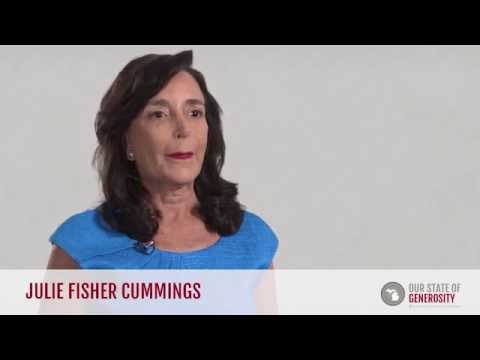 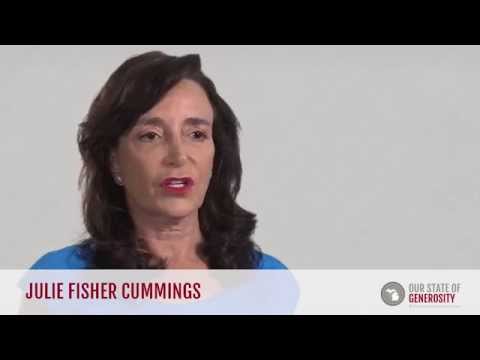 Ms. Julie Fisher Cummings talks about how she initiated conferences for family foundations to brainstorm how they could better work together. 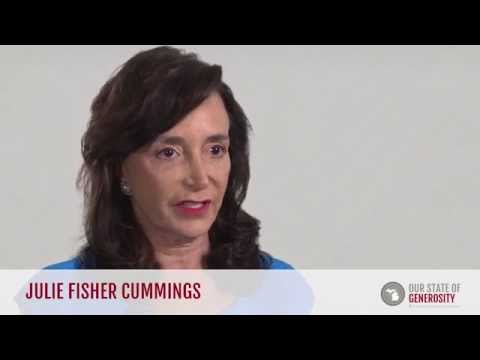 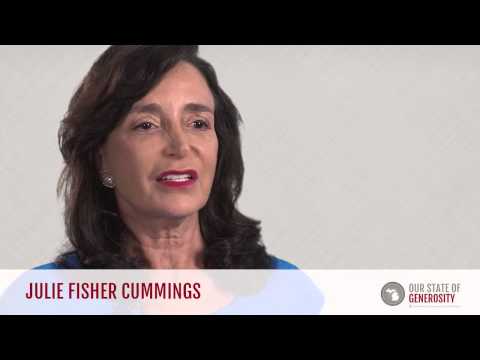 Ms. Julie Fisher Cummings talks about her experience serving as a board member for the Council of Michigan Foundations (CMF). 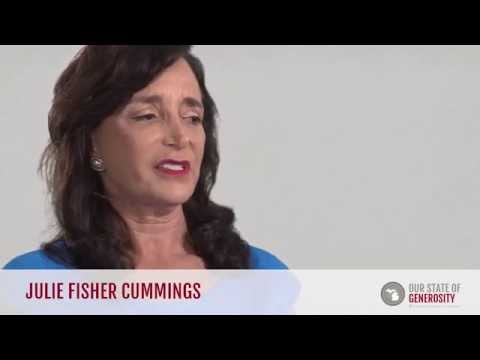 Ms. Julie Fisher Cummings talks about her career in philanthropy. 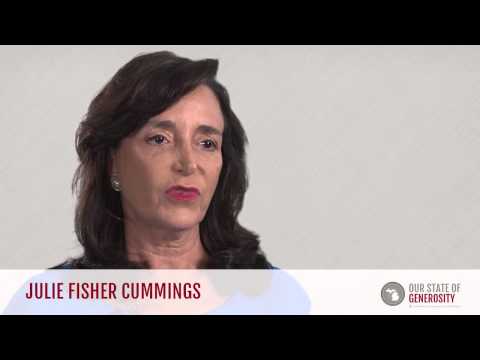 Ms. Julie Fisher Cummings talks about the factors that led to Michigan's "golden age of philanthropy." 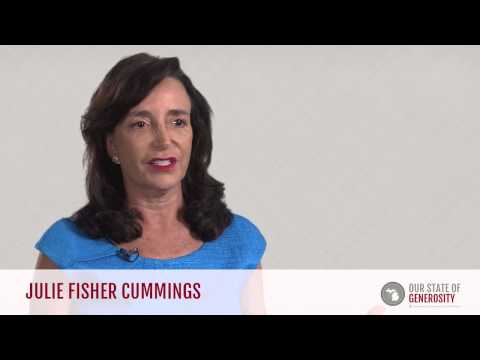 Julie Fisher Cummings earned a Bachelor of Arts in business and finance from Palm Beach Atlantic University in 1987, and a Master of Science in social work with an emphasis in social policy from the Columbia University School of Social Work in 2011.

Julie Fisher Cummings’ early introduction to the importance of philanthropy grew from her parents’ activism and generosity. Her father, Max M. Fisher, was a prominent Detroit philanthropist and trusted national political advisor to multiple presidential administrations. Throughout his life, Cummings remembers her father taught her that, “you can’t be a leader nationally, unless you are a leader in your hometown.” Cummings’ mother, whose philanthropy continues well into her 90s, taught her to, “give with your heart and then use your head.”

As a young adult, she moved to Florida and became Chair of the Women’s Division of the Jewish Federation of Palm Beach County and Campaign Chair of the United Way of Martin County. This would mark the beginning of a long road of service in volunteering and leading within the nonprofit sector. “Those two, the Jewish ethic of service and United Way, being a great model of how you raise money and bring everyone into the fold, have really helped,” said Cummings.

Cummings’ leadership in the field of philanthropy began in 1992, with an appointment to the Michigan Community Service Commission (MCSC) by Gov. John Engler. Cummings served until 2001, during which time she served as a member of the executive committee and assisted in establishing the ConnectMichigan Alliance (CMA).

As one of three CMA campaign co-chairs, Cummings helped raise $10 million to support infrastructure development and to match a $10 million public grant from the state of Michigan. CMA began in 2001 with the mission of promoting and strengthening a lifelong ethic of service and civic engagement throughout Michigan. It sought to build and strengthen Michigan communities by supporting existing nonprofits through promotion of volunteerism, advocacy and public policy, training and technical assistance, and direct programming. By housing all statewide volunteer and service-learning initiatives under one administration, CMA aimed to increase capacity and effectiveness while decreasing overall administrative cost and burden to support nonprofits. An innovative and collaborative initiative, it consisted of a partnership between Michigan Campus Compact, MCSC, Michigan Nonprofit Association, and Volunteer Centers of Michigan.

In 2006, she was appointed by President George W. Bush to the board of the Corporation for National and Community Service.

“If there is a need in the community, the community foundation will find it and they’ll convene a meeting of whoever they need to. They bring people together to figure out how they can best address that. Whether it’s this new economy initiative, whatever it is. It’s so funny you say this, because I have this visual of the community foundation sitting right in the center of Detroit having these big arms — this big web of support, and if people really need something, that’s where it’s going to come from.”

In 1992, Cummings co-founded Lovelight Foundation in Detroit, Michigan, dedicated to enhancing the lives of women, children, and families through education, outreach, and funding. Lovelight was critical in improving the Detroit community, helping introduce urban gardening programs in schools, supporting holiday youth programs, providing mobile dental services for children, and creating a school “adoption” program that turned abandoned lots into playgrounds. Lovelight has since been converted to a private women’s foundation, and is now part of the Women Moving Millions campaign.

Cummings served on the Council of Michigan Foundations’ board (1996–2006), and as chair (2005–2006). During that time, Cummings helped to increase activities for the family foundations committee, instituting an annual family foundation retreat that allowed members of family foundations to gather to discuss issues and best practices while making connections with like-minded foundations across the nation.

Since 2005, Cummings has served as the managing trustee for the Max M. and Marjorie S. Fisher Foundation, a $250 million endowed family foundation based in Detroit, Michigan, that supports health, culture, Jewish life, and strengthening youth and families. The Fisher Foundation also seeks to support the rebirth of Detroit by focusing on early childhood development efforts and supporting major cultural institutions within the city.

“I really also feel like that spirit of generosity. I look at Michigan as a big heart, the throbbing heart, and look at the worst economic times and they reach out and help each other … perseverance, dedication, loyalty. I mean look at the people that have stayed in here, time after time. Some people go and they fund something and ‘okay, that’s it; I want to move on to the next great thing.’ In Michigan, they don’t do that. They stay in there. They build roots and that’s it.”

Julie Fisher Cummings was interviewed about insights and experiences in working with Michigan’s philanthropic community and the Our State of Generosity (OSoG) partners. The following quotes relate to the five organizing themes of the OSoG project.

“ … you talk about empowering local communities and that’s really what I learned, is how to treat your local grantees and your local community members as partners and not to feel like because you have more money, or you’re in a higher position, that you know better than they do.”

“Collaboration. You’re so right, because look at the model that we have in our state which is like no other state — and believe me, I’ve lived in other places — and that model is the ability to work with people outside of your group … It’s nonpartisan; it’s apolitical; it’s a-religious. It doesn’t matter. It’s in the goal of insuring that all people have a good life.”

“The family foundations are what I call “the army on the ground,” because they want to get to know their grantees, and they’ll stay in and they’re partners with them, and you see them pulling up their sleeves and working alongside them. It’s not like, ‘Come to me for a grant.’ In most cases, it’s because they are firmly committed to the work they’re doing.”

“One thing that CMF does that I haven’t noticed other RAGs (Regional Associations of Grantmakers) doing, is they have a very strong government relations piece and they really educated us about the need to really engage our policy makers. I have found through my life … is that no change really happens unless it’s driven from policy change. So they understood that.”

“Those three organizations work so well together [Michigan Community Service Commission, Michigan Nonprofit Alliance, and Council of Michigan Foundations]. I think it’s a wonderful model of collaboration that we need to have in the future of government, nonprofit, and private sector.”