As the author of Our State of Generosity, Kathryn (Kathy) Agard built on 40 years of experience in the nonprofit and philanthropic sector. Agard served in numerous executive level roles across local, state, regional, and international nonprofit organizations. For nearly 25 years, Agard led the development and implementation of two Michigan major philanthropic initiatives — the Michigan Community Foundations' Youth Project and Learning to Give — for the Council of Michigan Foundations. Prior to retirement, Agard served as the executive director of the Dorothy A. Johnson Center for Philanthropy at Grand Valley State University. 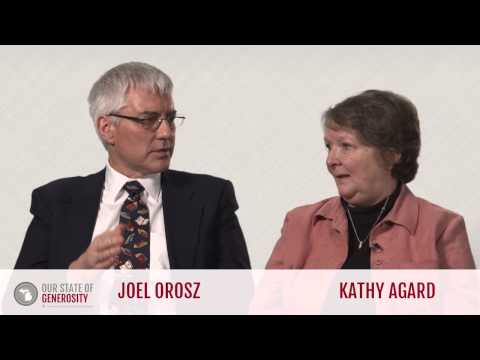 Kathy Agard and Joel Orosz discuss their concerns with the movement toward a business model of philanthropy. 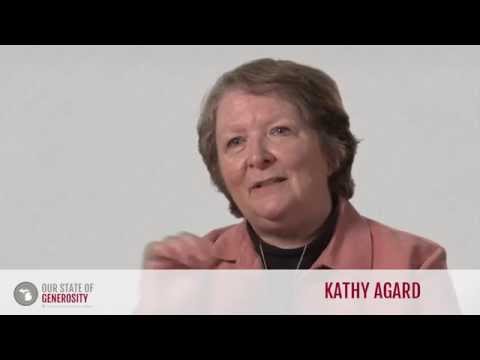 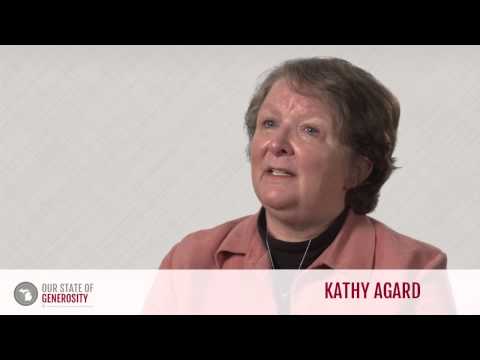 Kathy Agard talks about how inclusion, big vision, and strong relationships are needed to build a successful philanthropic infrastructure. 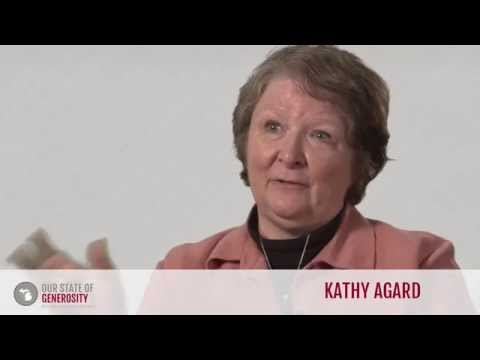 Kathy Agard talks about the mission and development of the Michigan Tax Credit. 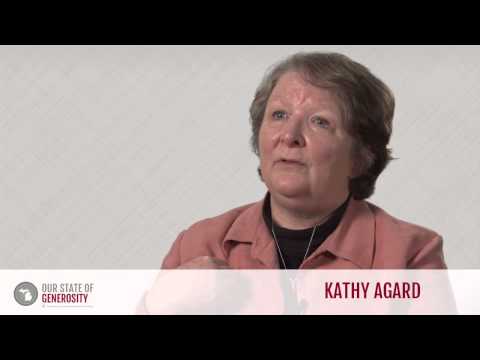 Kathy Agard on how young children contribute to and benefit from Learning to Give. 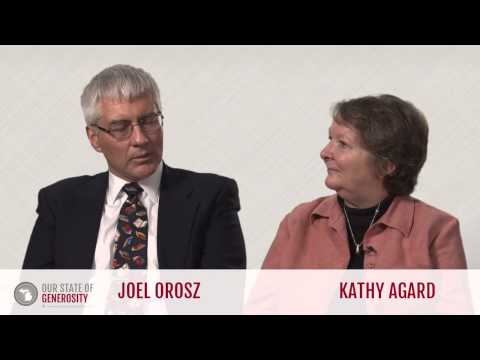 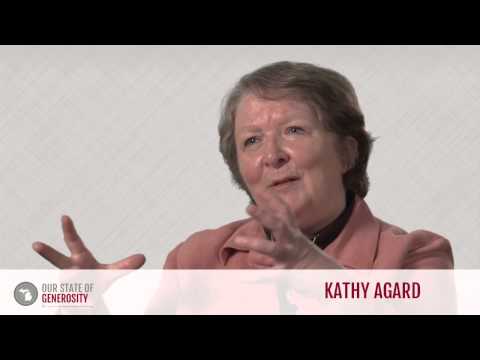 Dr. Kathy Agard talks about the balance of money, knowledge, and talent in philanthropic work. 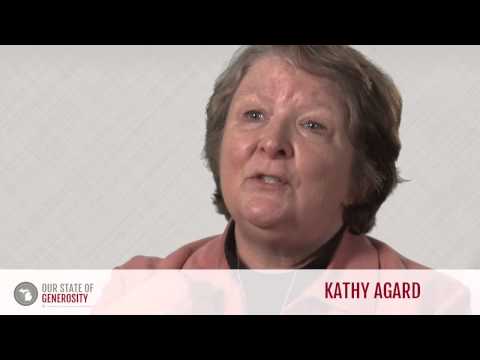 Dr. Kathy Agard talks about how the Michigan Community Foundations' Youth Project (MCFYP) grew out of the values of big vision and collaboration. 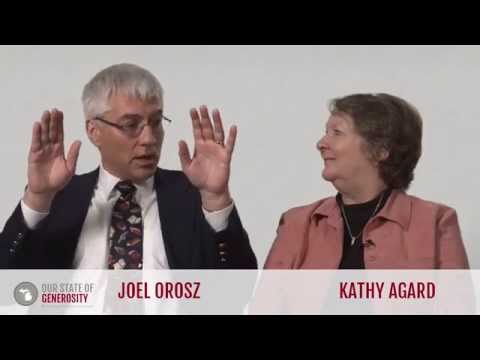 Dr. Kathy Agard and Dr. Joel Orosz talk about how children embody the kind of fearlessness that allows youth philanthropy to create bold and innovative change. 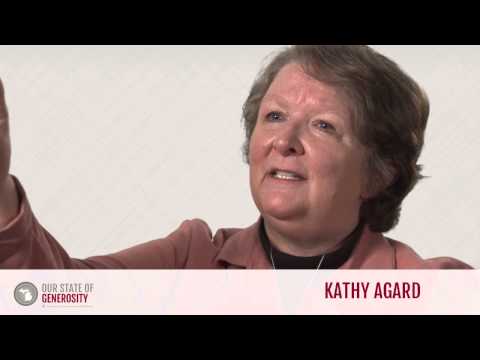 Dr. Kathy Agard talks about how the process of achieving good is messy and requires patience, proper timing, and rigorous fundraising. 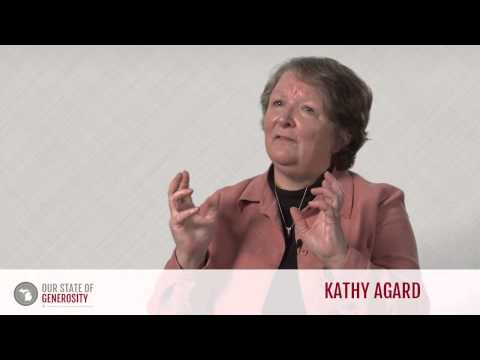 Dr. Kathy Agard talks about how the philanthropic spirit of giving means worrying less about ego or individual copyright and more about furthering the cause. 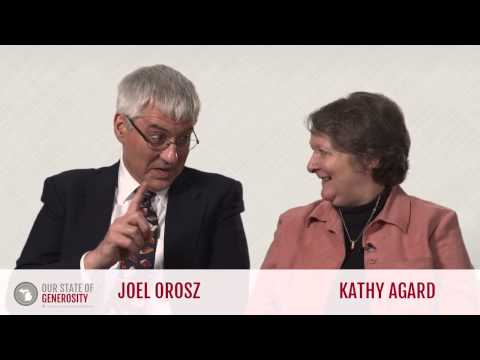 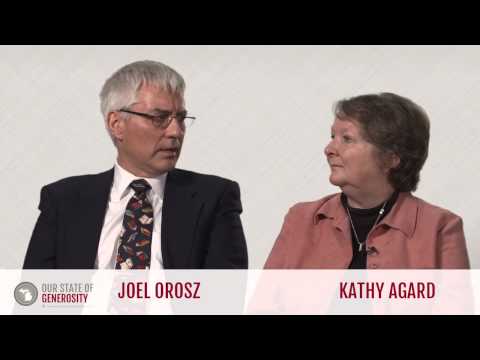 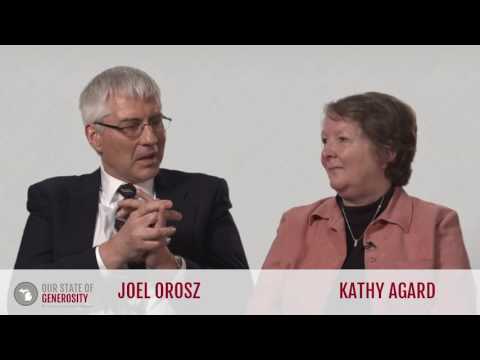 Dr. Kathy Agard and Dr. Joel Orosz talk about the push for diverse Youth Advisory Committees and the success stories that resulted. 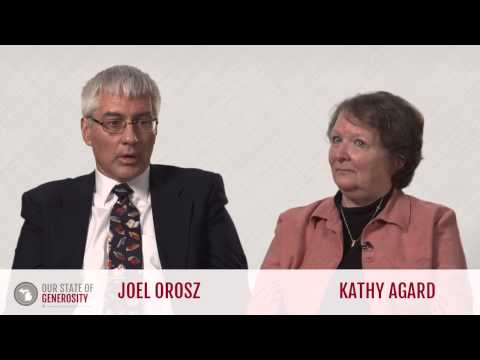 Dr. Kathy Agard and Dr. Joel Orosz discuss the effects of prolonged adolescence on today's youth and how philanthropy can help. 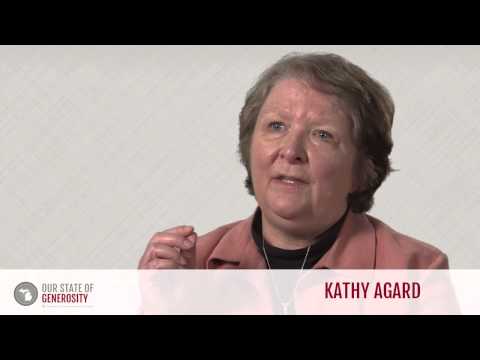 Dr. Kathy Agard talks about her career in philanthropy. 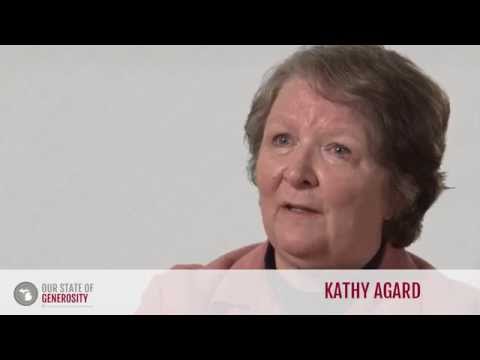 Dr. Kathy Agard talks about the mission and development of the community foundations Branding Project. 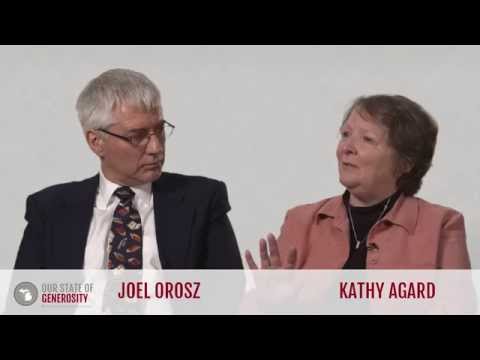 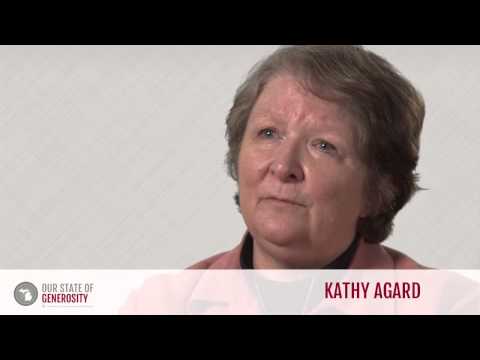 Dr. Kathy Agard talks about how the tax credit compelled the philanthropic sector to legally define what it means to be a community foundation. 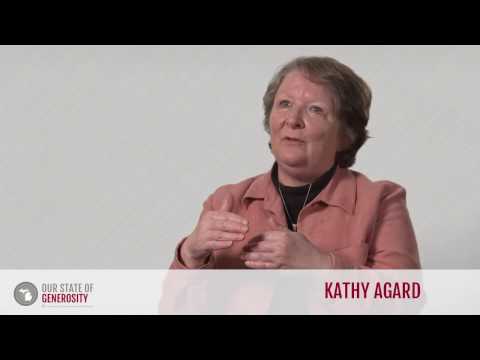 Dr. Kathy Agard talks about how Learning to Give developed benchmarks for students K-12. 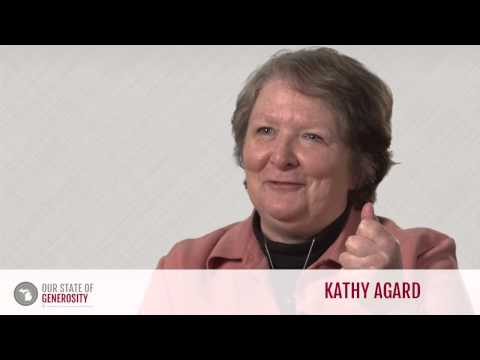 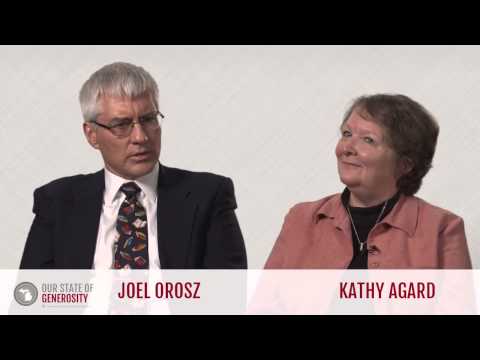 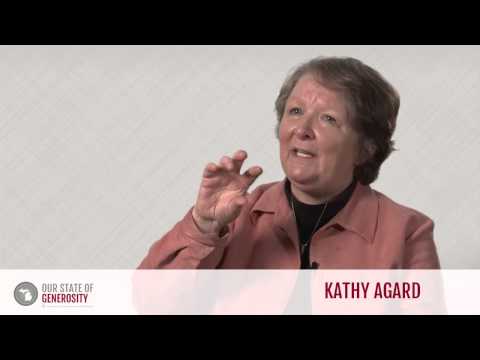 Dr. Kathy Agard talks about the history and development of Learning to Give. 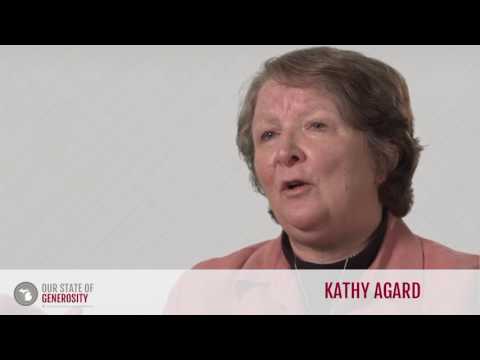 Dr. Kathy Agard talks about how Learning to Give was successful because it was led by teachers, rather than standards or school boards. 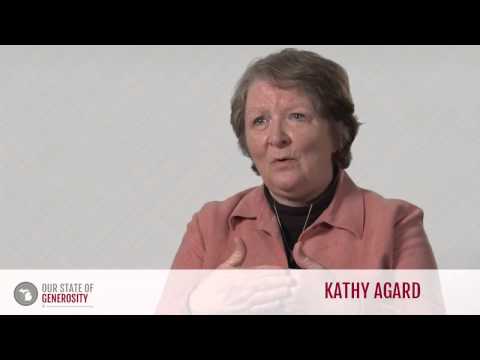 Dr. Kathy Agard talks about both the resistance and success to youth grantmaking through the Michigan Community Foundations' Youth Project (MCFYP).

Kathy Agard earned a bachelor’s degree in political science and communication from Albion College and a master’s degree in public administration from Western Michigan University. While working at a community hospital in her hometown of Muskegon, Agard returned to WMU and earned a doctorate in educational leadership with double majors in public administration and human resource development.

One of Agard’s first personal experiences with philanthropy came when she received a debate scholarship that helped her attend Albion College. After graduating, Agard worked for a short time as an admissions counselor for Albion before taking a job as a social worker for a regional center that served people with disabilities. Agard assisted individuals returning home from mental health institutions by connecting them with support structures.

In this position Agard built connections that led to a position at the newly-organized Community Mental Health of Ottawa County where she developed a Life Consultation Center, a service that provides a lifelong support system for families who have children with disabilities. Agard also built connections with hospitals and managed volunteers and after two years accepted a similar position at Muskegon Community Mental Health.

“I’m always a Quaker admirer, and I always think that each of us hold a piece of the truth. If everybody brings it together, you get a much richer understanding of what’s going on both in terms of talent and in terms of knowledge that was brought to the table in many ways on these projects.”

After leaving Muskegon Community Mental Health, Agard spent a significant amount of time working for Planned Parenthood in a variety of positions, initially as a half-time director for the Muskegon office. After moving with her husband to Ann Arbor, Michigan, Agard took a position at the regional office of Planned Parenthood Federation of America. In this role Agard performed multi-state technical assistance for nonprofit organizations including risk management, human resource development, and board development. This sparked an interest in how nonprofits operate. After a year and a half, Agard and her family moved to Philadelphia, where she became the associate director and executive director of Planned Parenthood of Southeastern Pennsylvania which served three metropolitan counties. Agard was the youngest CEO of a metropolitan Planned Parenthood organization in the nation.

Agard and her family then returned to Muskegon where she assumed responsibility as the public relations director for Hackley Hospital and was later promoted to vice president of planning working with volunteers, planning, and acting as a lobbyist. During this time she earned a doctoral degree from WMU.

In 2006, Agard became the executive director of the Dorothy A. Johnson Center for Philanthropy, and an associate professor with the School of Public, Nonprofit and Health Administration at Grand Valley State University. The Johnson Center grew under her leadership before she retired at the end of 2010.

The Michigan Community Foundations’ Youth Project (MCFYP) was Agard’s initial undertaking with the Council of Michigan Foundations. MCFYP endeavored to strengthen and spread community foundations throughout the state, and to create a youth endowment and Youth Advisory Committee (YAC) for each community foundation. The foundations’ YAC would be comprised of diverse young people under the age of 21 and would empower them to act as grantmakers. This gave them the ability to solve issues within their community while educating them on the process of grantmaking and the capacity of foundations and nonprofits to create change. MCFYP succeeded in reaching its goals; every Michigan community has access to a community foundation, and YACs continue to operate across the state. The project has become a model for youth grantmaking across the nation.

After working on MCFYP for eight years, Agard began work on the K-12 Education in Philanthropy Project, now known as Learning to Give. This initiative provides K-12 teachers with the tools to incorporate themes and topics about philanthropy into their classrooms. The vision behind Learning to Give is that all youth have an understanding of philanthropy, know how it affects their community, and know how they can become actively involved in philanthropic activities. This vision is facilitated through lesson plans that integrate a focus on philanthropy into the topics that teachers are already required to teach, thus delivering the philanthropic lessons to youth without creating new work for already overburdened teachers. These lesson plans were created by teachers, for teachers, and are available online for free download. Agard served as executive director of the Learning to Give initiative for CMF from 1997 to 2006 and guided the focus and development of the program which later spread from Michigan to much of the United States.

“One of the things we benefit by, in Michigan, is that people naturally have developed relationships, but I also think that they have an understanding that they need to nurture their relationships. People get in the car and they actually drive to the Upper Peninsula. They drive over to Detroit, or from Detroit they drive over to Muskegon. Michigan is a big state, and still people get together. They take the time to get together. They talk with one another. They josh one another. They go to dinner. I think all of those kinds of things help it when things go wrong. So then when the natural tension happens that will happen as you’re trying to do something new, you have trust in the other people that it just went wrong. It was just a mistake, not that there was any ulterior motive or that there was any other thing other than just life is messy and sometimes things happen, and that everybody is trying to help each other out. Being intentional about developing those relationships might seem a little odd at first, but it’s incredibly important.”

In 2006, Agard became the executive director of the Dorothy A. Johnson Center for Philanthropy at Grand Valley State University (GVSU). Under her leadership, the Johnson Center introduced new functions, and increased income each year. Among the expansions were the creation of The Foundation Review, the first peer-reviewed journal of philanthropy, and the creation of the Frey Foundation Chair for Family Philanthropy. Agard retired at the end of 2010, and was succeeded by James Edwards, who said “Dr. Kathy Agard retired, leaving us with a strong local and national reputation. We plan to continue building on her work and our commitment to being a key organization in support of the philanthropic and nonprofit work in Michigan and nationally” (para. 4). During this period, Agard also taught as an associate professor with the School of Public, Nonprofit and Health Administration at GVSU.

Agard volunteered with a number of nonprofit groups, and served on a variety of boards within the sector. She served as vice chair of the board of trustees for Hackley Hospital, chaired its investigational review committee, and served on its personnel committee. Agard is very active within her church, Temple United Methodist Church, and was involved with the both the board of trustees and the board of advisors for the Michigan Nonprofit Association. As a writer in the field, Agard edited the two-volume series, Leadership in Nonprofit Organizations: A Reference Handbook.

Agard was interviewed regarding her insights and experiences in working with Michigan’s philanthropic community and the Our State of Generosity (OSoG) partners. The following quotes relate to the five organizing themes of the OSoG project.

“In Michigan, I do think we have all benefited from these extraordinary leaders – and they have been extraordinary leaders in so many ways – but one of them is that they have nurtured talent and they have left a lot of people to take responsibility. A piece that I have appreciated so much was that, for example, the program officers from Kellogg would sit with us. I never felt like [they] were sitting in judgment of us, but that you were partners.”

“Money is certainly important, but I have – and maybe I’ve been spoiled by Michigan but I do really believe that money follows good ideas and energy, and that if you care about it — I suppose I learned this from Dottie… that ‘She who cares enough about it and is willing to go the extra mile, that money will follow because people want to be engaged in success and in projects and things that are interesting and things that make a difference, and that money will follow that good work.’ I’ve just believed that my whole life.”

“I think there’s a lot of human talent in the world. I think it’s a matter of letting people use their talents and recognizing what they are rather than feeling like there’s a paucity of it.”