Margaret Ann “Ranny” Riecker was the longtime president and CEO of the Herbert H. and Grace A. Dow Foundation and a trustee of the Towsley Foundation. She was one of the original volunteer board members of the Council of Michigan Foundations, representing private family foundations. Riecker was the first chair of the Leadership Advisory Committee for the Dorothy A. Johnson Center for Philanthropy, and served in multiple, critical volunteer policy roles across the state over several decades. Riecker was the first, and so far only, person to have served twice as the chair of the CMF board. Riecker had a particular interest and expertise in developing public policy supportive of private philanthropy. 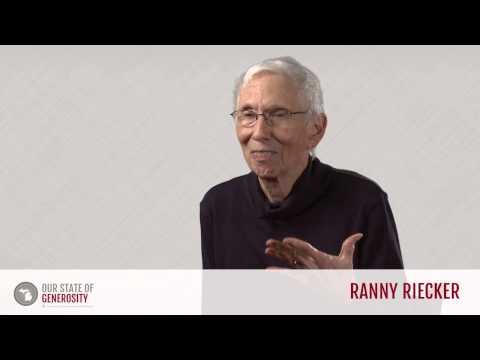 Ranny Riecker discusses how the Council of Michigan Foundations engaged in public policy and lobbying to save the life of the philanthropic sector. 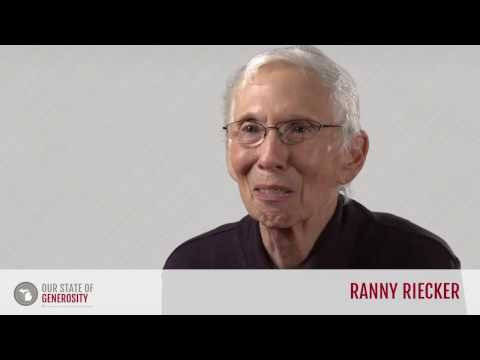 Ranny Riecker talks about Michigan's unique and effective approach to public policy through initiatives like RAGS on the Hill. 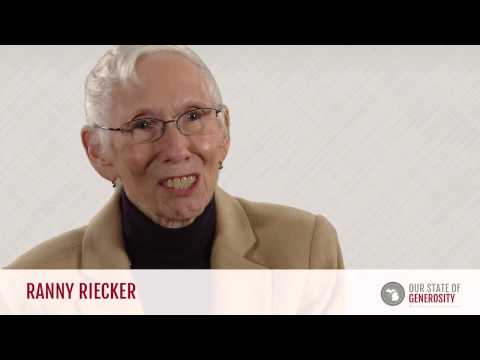 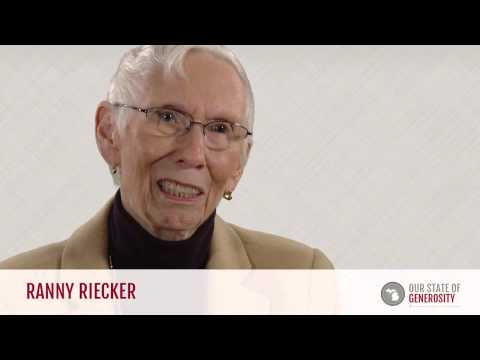 Ms. Ranny Riecker talks about the importance of being a good listener and not imposing your own methods on local leaders. 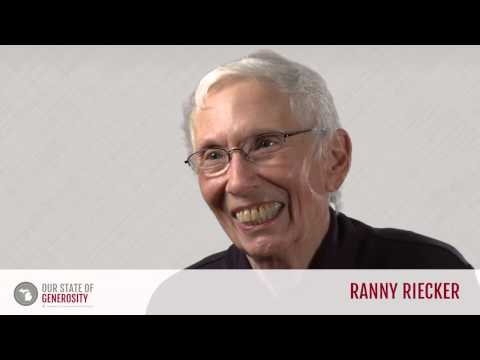 Ms. Ranny Riecker talks about how public policy initiatives need to be informed by legitimate research and data in order to be truly effective. 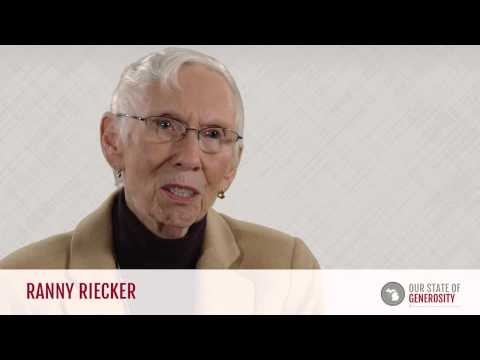 Ms. Ranny Riecker talks about how the Council of Michigan Foundations (CMF) worked effectively toward change by focusing on a clear mission. 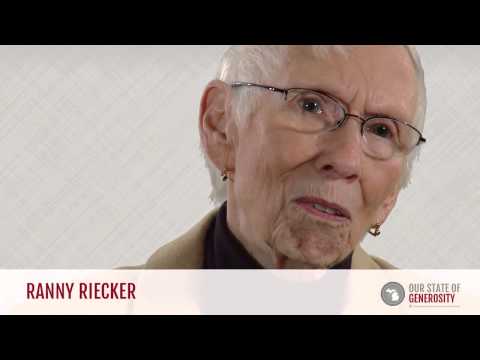 Ms. Ranny Riecker provides advice on how to prepare for a visit with a legislator. 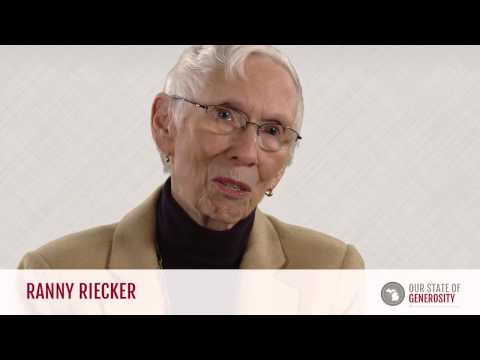 Ms. Ranny Riecker talks about how the Michigan Tax Credit encouraged more people to give back to their communities. 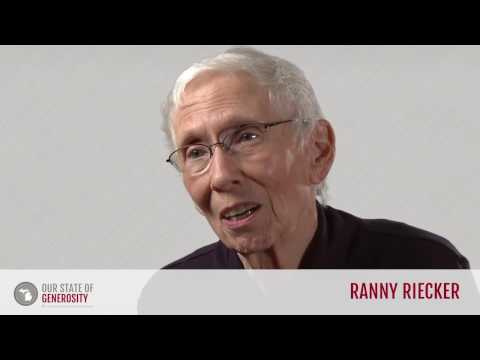 Ms. Ranny Riecker talks about how foundation leaders need both collaboration and education to effectively implement their missions. 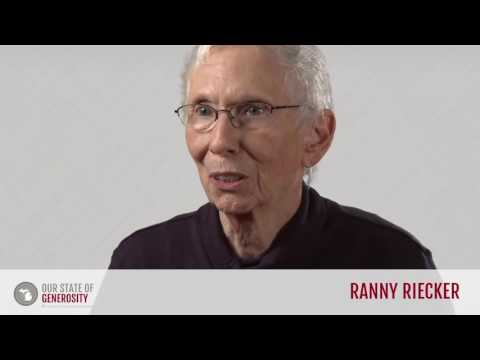 Ms. Ranny Riecker talks about the Tax Reform Act of 1969 and its effect on foundations. 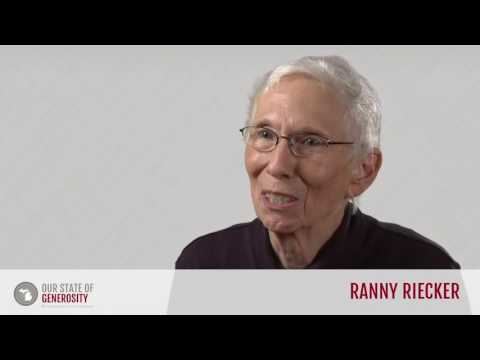 Ms. Ranny Riecker talks about the initial meetings that would create the Council of Michigan Foundations, in response to the Tax Reform Act of 1969. 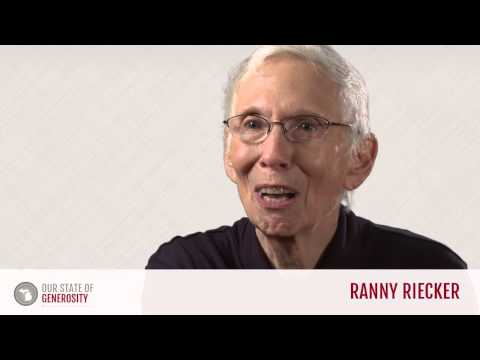 Ms. Ranny Riecker talks about her career in philanthropy. 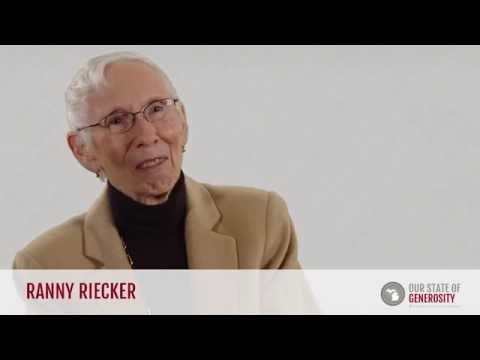 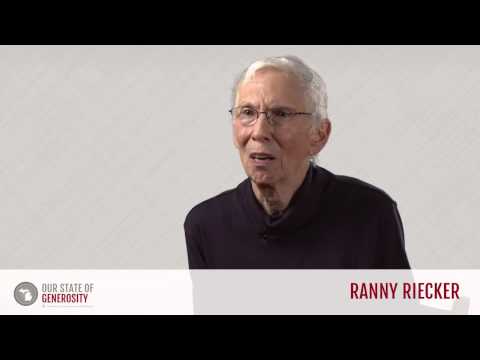 Ms. Ranny Riecker talks about how useful the resources provided by the Johnson Center for Philanthropy were for her foundation.

Ranny Riecker earned a Bachelor of the Arts in zoology from Carleton College in Minnesota, and attended Mount Holyoke College in Massachusetts for graduate education.

Margaret Ann (Ranny) Riecker grew up in Ann Arbor, Mich. She was eight years old when World War II broke out, and her father left to join a medical unit assembled by the University of Michigan. Riecker’s mother played a central role in teaching her the value of philanthropy through action, and insisted that one third of any earnings went to their church, and another third was invested in the Dow Chemical Company, founded by Riecker’s grandfather. Riecker left Mount Holyoke College to be with her husband, who had joined the Army and was stationed at the Pentagon. Upon leaving the Army, Riecker and her husband moved to Midland, Mich., where they became involved in the election campaign of a Michigan state senator. This campaign gave Riecker a crash course education in fundraising, political organizations, and leadership.

When Elly Peterson became chair of the Michigan Republican Party in 1965, she asked Riecker to replace her as vice chair to focus on party women and the women’s club. This position centered on training and empowering female leaders in the party and encouraged them to run for party offices. Riecker said in an interview with Kathy Agard, “The law gave them the office but it didn’t empower them. They really needed to learn how.” Peterson later encouraged Riecker to run for the position of Republican National Committeewoman, and she was successfully elected.

Riecker’s mother founded the Harry A. & Margaret D. Towsley Foundation in 1959, and Riecker and her sisters became trustees in 1962. She later acted as the foundation’s president from 1985 to 1999, when she also assumed the position of board chair. Riecker became a board member of the Herbert H. and Grace A. Dow Foundation (which had been founded by her grandmother, Grace A. Dow) in 1963. She served on the board for 51 years, and as president for 13 years, from 2000 to 2013. By the end of 2013, the foundation had over $400 million in assets.

With experience in politics and with family foundations, Riecker quickly became influential across Michigan, and was involved with two of the state’s infrastructure organizations, the Dorothy A. Johnson Center for Philanthropy and the Council of Michigan Foundations (CMF). Riecker’s involvement with CMF was in the early 1970s as co-founder, and with a political background, in the public policy aspects of the organization. Riecker served as trustee from 1974 until 2002, chair of the board from 1982 to 1984, and chair again from 1999 to 2000. Additionally, Riecker was a longtime chair of CMF’s government relations committee.

“You’ve got to know the people you’re talking with whether it is your congressman, your U.S. senator. You have got to know a little bit about them, where they’re coming from. And hopefully they should know that the people who are coming in to see them aren’t just another lobbyist, that they truly are people who may vote for them or may not vote for them, but they are their constituents and their community leaders in their communities coming in.”

Outside of Michigan, Riecker was involved with the Council on Foundations, a nationwide philanthropic infrastructure group. She held the position of trustee from 1992 until 1996, and offered her expertise by chairing its legislative and regulation committee from 1992 to 1995.

Much of Riecker’s time was spent furthering and supporting higher education throughout Michigan and at her alma mater, Carleton College in Minnesota. She was a member of Central Michigan University’s board of trustees for 18 years, acting as chair in 1976, 1983, and from 1989 to 1992. Riecker served as board member, longtime supporter, and benefactor to the Gerald R. Ford School of Public Policy at the University of Michigan. Leading investments from both the Dow Foundation and the Towsley Foundation were made to the Ford School, in addition to her personal gifts, to establish fellowships and scholarships for promising students of the program. At Carleton College, Riecker was an active board member from 1987 to 2010, and chair of the board from 1999 to 2004. Riecker was presented honorary doctorate degrees from Albion College, Central Michigan University, Ferris State University, Kalamazoo College, University of Michigan, Carleton College, Northwood University, and Michigan State University.

Riecker’s commitment to bettering the mid-Michigan community is almost unrivaled, and she was involved with a vast number of local nonprofits either by serving as a board member or through active grantmaking.

Ranny Riecker was interviewed regarding her insights and experiences in working with Michigan’s philanthropic community and the Our State of Generosity (OSoG) partners. The following quotes specifically relate to the five organizing themes of the OSoG project.

“We would talk about lobbying to save our lives; that we could do that legally. It sounds funny to actually use that kind of language. We weren’t being extremists, but that was the definition of how we could lobby, was to save our lives [self-defense], not for other valid issues or candidates.”

“One of the things that makes Michigan unique truly, is that we actually organized on congressional district levels and have someone in every congressional district who was a foundation leader. It was the leadership, probably board leadership, even though staff might have been involved, but it was board leadership who was truly appointed to be liaison with their particular member of Congress. To a very great extent, we tried to do that with both the state senate and state house as well.”

“Frankly, [the Council on Foundations] recognize[d] Michigan as being the innovators as a regional association, and they were thinking much more in terms of regions or regional associations. We were very definitely the innovators, not just, I think, in our political activity but in our whole approach to creating philanthropy, teaching philanthropy.”

“[Grantmaking] is fun; it is exciting. You meet so many absolutely wonderful people with wonderful ideas and sometimes they really do have the capacity to carry them out and sometimes they don’t and you can be helpful. I think we, particularly at the Dow Foundation, well, all of the bigger foundations, our role is not just giving money — we do a lot more. We do a lot of convening and facilitating. I don’t like people trying to reinvent the same wheel all the time and so the more I know, probably the more frequently I say, ‘Do you know so-and-so who is trying to do the same thing? Would you like to talk with them? Maybe you should get together.’”

“I truly believe that it is very hard to lead, or anything else, effectively if you don’t have legitimate factual information. We are seeing a lot of people right now on the public scene who have no more substance than slogans and I really and truly don’t know what they are talking about … it is just absolutely unbelievable, the lack of information, or the proliferation of incorrect information and I think this is an increasingly great challenge. How do elected officials get information on any topic? And even though they have policy staffs, where is the policy staff getting their information from? And frequently, well, who chooses the witnesses to testify before Congress? It is as simple as that. I think this is truly a problem that needs to be addressed.”

“It doesn’t always work here [in Michigan] but I really think that we are more comfortable in our skin, we are not competitive. Too frequently if you put a group of nonprofits in a room together, one of the things they are going to say is they are competing for the same dollars. Well, I don’t believe they are competing for the same dollars because I think the dollars are there if what they are doing brings value to our communities, and if it doesn’t bring value, it doesn’t matter whether they have a competitor or not.”

“Both my executive director and I, still both of us serve on more committees than we should. It is wonderful. It is really not to be controlling, it is the best way we have of actually being involved and knowing what is going on in the field, within the state, and also within our community itself.”

“Be a good listener. Don’t approach problems knowing ‘I know the answers’ because you probably don’t. I wish I did know the answers. Listen to what people have to tell you about what they’re doing, what they think their problems are and then try to work with them to find a solution that works for them.”