Rob Collier was president and CEO of the Council of Michigan Foundations, the largest and one of the oldest regional associations of grantmakers in the nation, and a partner in the Our State of Generosity project. Collier’s perspectives on Michigan’s history were informed by a career at the Mott Foundation (private family philanthropy), Gannett Foundation in Rochester, New York (corporate philanthropy), Rotary Charities of Traverse City (community philanthropy), and as founder and CEO of the Grand Traverse Regional Community Foundation. Collier was a board member of CMF before assuming the role of CEO. Collier remains involved in a variety of partnerships with infrastructure organizations — Michigan Nonprofit Association, Michigan Community Service Commission, and the Dorothy A. Johnson Center for Philanthropy. 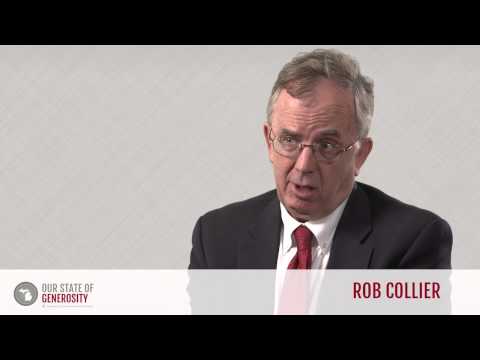 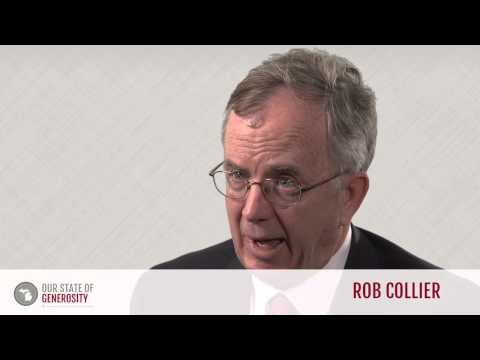 Rob Collier on the importance of public-private partnerships in the philanthropic sector. 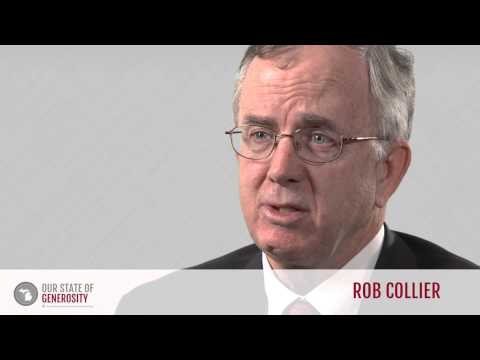 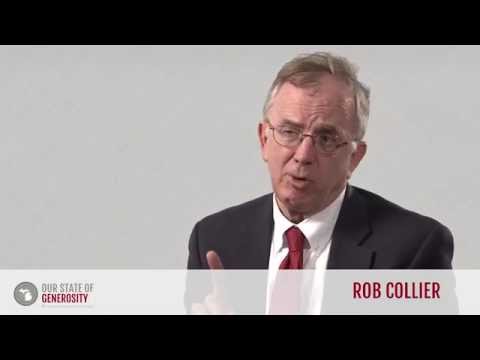 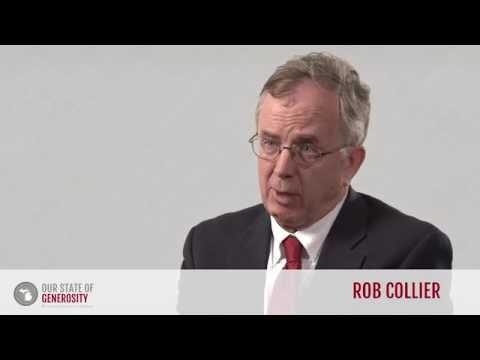 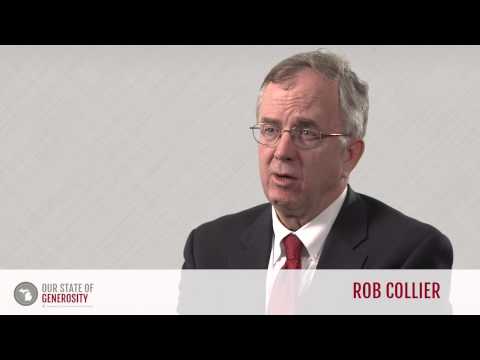 Mr. Rob Collier discusses the need for patience in the collaboration between nonprofit organizations and government. 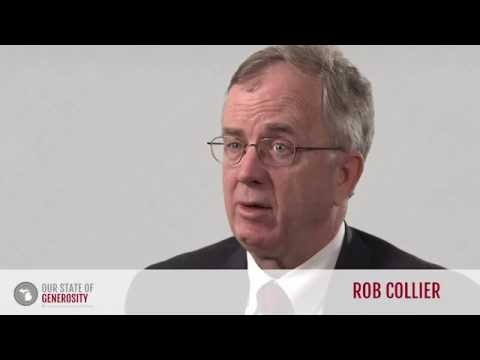 Mr. Rob Collier talks about the importance of teaching philanthropy to the next generation. 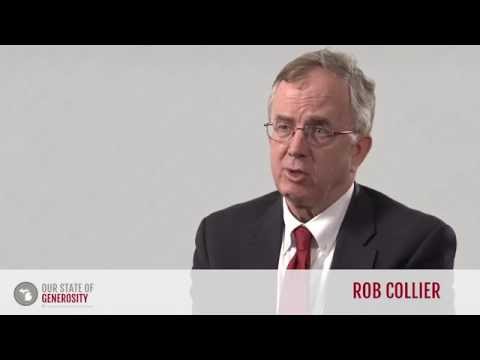 Mr. Rob Collier talks about the role of the Office of Foundation Liaison in promoting Michigan philanthropy. 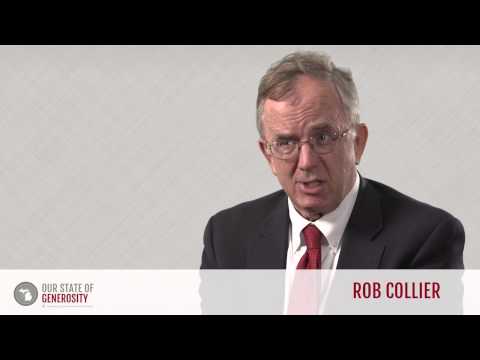 Mr. Rob Collier talks about the relationship between Michigan philanthropy and the Office of the Attorney General. 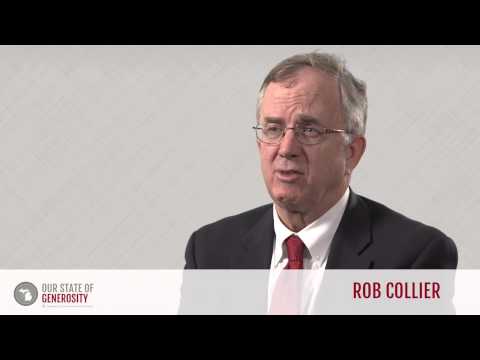 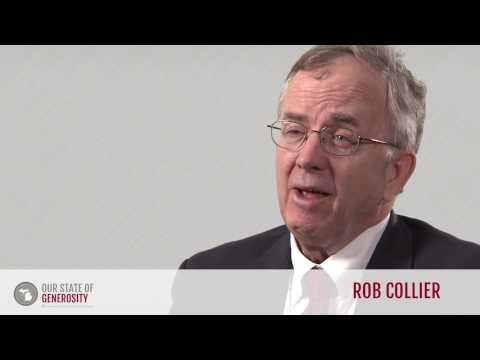 Mr. Rob Collier talks about the mission, development, and national growth of RAGS on the Hill. 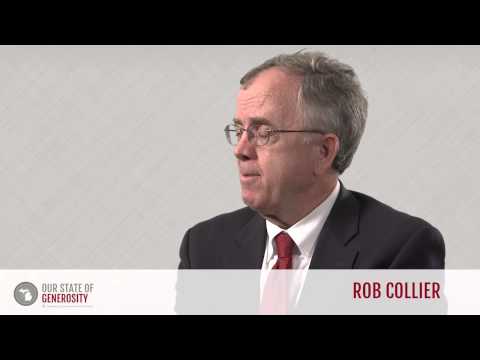 Mr. Rob Collier talks about the importance of patience and repetition in working with new public policy makers. 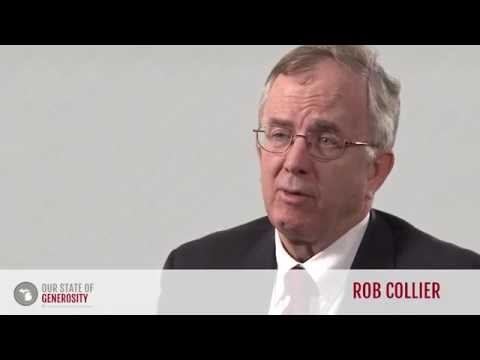 Mr. Rob Collier discusses the balance between local mission and funds and national and international expansion at the Council of Michigan Foundations (CMF). 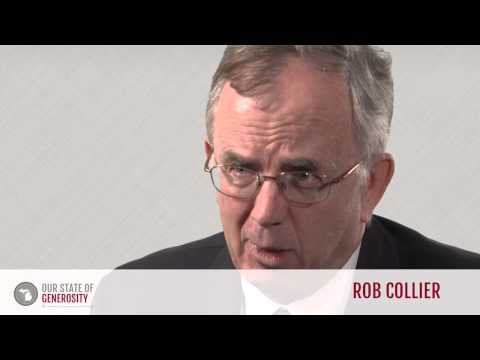 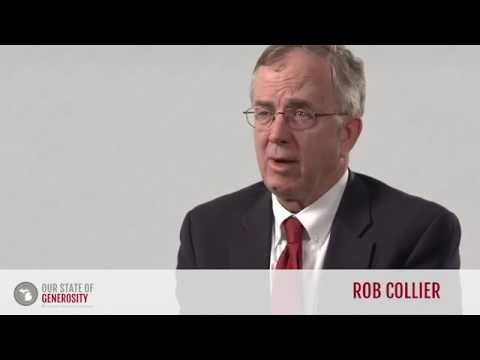 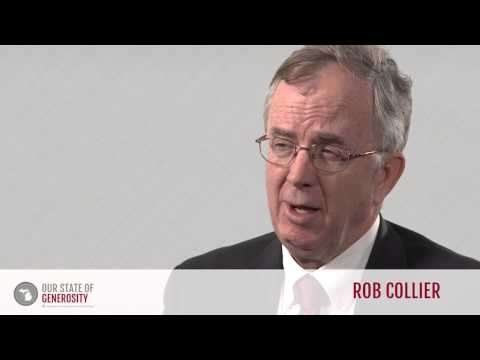 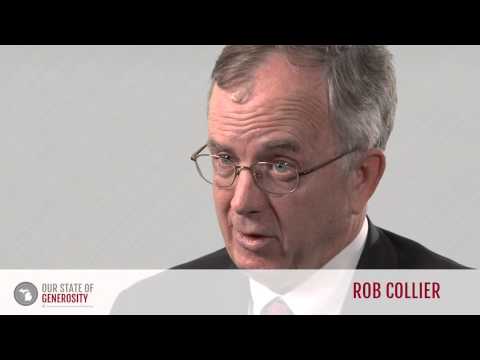 Mr. Rob Collier tells a story about a young man whose life was turned in the right direction by youth grantmaking. 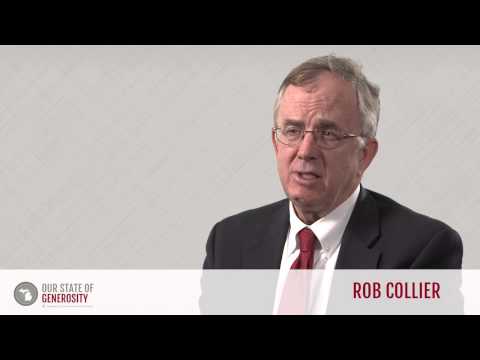 Mr. Rob Collier talks about the mission and development of the Michigan Nonprofit Caucus. 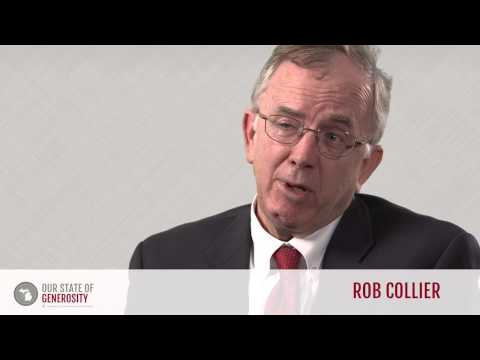 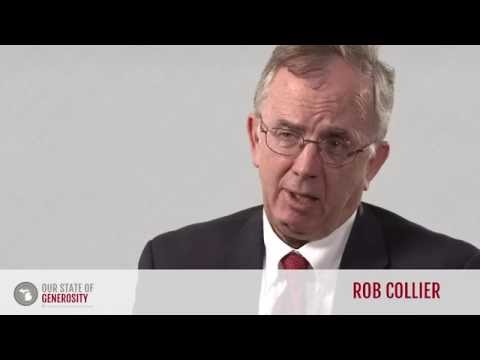 Rob Collier earned a Bachelor of Arts in sociology and political science from Hobart College, in Geneva, New York, in 1973; and graduated from the educational programs of Leadership Flint and Outward Bound USA, in 1976 and 1981 respectively. Collier received a Master of Arts in public administration from Central Michigan University, in Mt. Pleasant, Michigan, in 1994.

Rob Collier grew up in New England, and initially came to Michigan as an AmeriCorps VISTA volunteer. The VISTA program is a national service program designed to combat both urban and rural poverty. VISTA was formed in 1964, and became a part of AmeriCorps under the Michigan Community Service Commission in 1993. As a VISTA volunteer, Collier saw firsthand the hardships that impoverished children faced in Flint, Michigan, and penned a letter to William White, CEO of the Charles Stewart Mott Foundation, with several suggestions for the foundation’s giving. White then invited Collier to discuss the situation in person, which led to Collier being hired as a program associate in 1977. Collier managed grants nationwide that focused on economic development, volunteerism, and community-building until 1983. Collier then served as the city administrator for the City of Flint, Michigan, and led the administrative team of Mayor James Sharp in managing citywide practices such as strategic planning, organizational process improvement, and intergovernmental relations.

In 1988 and 1989, Collier worked for the Gannett Foundation in Rochester, New York, and assisted the vice president in the management of annual grantmaking through Gannett properties in 97 different communities across the country.

In 2000, Collier succeeded Dorothy Johnson as president and CEO of CMF. Collier reaffirmed CMF’s public policy focus, and strongly supported treating government as a partner of the nonprofit sector. Collier worked to formalize this type of partnership by supporting the creation of the Michigan Nonprofit Council for Charitable Trusts, which provides expertise and guidance to the Attorney General, and the Governor’s Office of Foundation Liaison, and Foundations on the Hill. Collier was instrumental in overseeing the expansion and scaling-up of Michigan programs, including the growth of the Great Lakes Collaborative to include Canadian community foundations and those from other states. Collier supported the development of the Midwest Community Foundations’ Ventures, a supporting organization of CMF, that builds stronger communities through collaborative activities by community foundations in Michigan, Illinois, Ohio, and Indiana.

Collier is an outspoken proponent of infrastructure organizations within the nonprofit sector. In an interview for the Our State of Generosity project, Collier discussed CMF and the Michigan Nonprofit Association (MNA), “The idea was we created a safe place for members to come together, learn from each other, share stories, at times disagree and opt out of a partnership, which is fine, but creating that safe place, I think was very, very important”. Collier’s dedication to that idea showed through his service to Michigan’s infrastructure organizations as a trustee of MNA and as a member of the Michigan Community Service Commission. Similarly, Collier was involved with national infrastructure organizations and served on the public policy committee for the Forum of Regional Associations of Grantmakers and the Council on Foundations, and previously held other volunteer positions at both organizations.

“I think the first thing we learned was that we were stronger collectively than we were individually; that there was benefit by really pulling together and pooling our resources to partner with government. I think that was the first thing. I think the second thing was that we realized that we had to treat government not as an adversary, because it would have been easy when you have the Tax Act that happened in 1969 … My response is that we have learned over the years that government is an extremely important partner and that it is much better for us to be at the table with government than to be on the menu for government.”

Outside of these infrastructure organizations, Collier was involved in a wide range of boards throughout the sector. Earlier in his career, Collier served on the nonprofit board of the nonprofit panel of Independent Sector. He dedicated time and effort to those suffering from HIV/AIDS, acting as a trustee of the Michigan AIDS Fund, a member of the steering committee for Funders Concerned About AIDS (based in New York), and as a trustee for the Michigan AIDS Coalition. Collier served as a member of the board of directors of the Michigan Association of United Ways, and in 2011, was appointed by the governor to the executive committee of the Michigan Economic Development Corporation.

Collier currently serves as chair of the Learning to Give board of trustees and as a trustee of the Russell and Annabelle Woodard Family Fund.

In honor of Collier’s service to CMF and Michigan philanthropy, in 2018, the Robert S. Collier Public Policy Endowment Fund was established to address critical policy issues facing the field of philanthropy and Michigan communities.

Collier was interviewed regarding his insights and experiences in working with Michigan’s philanthropic community and the Our State of Generosity (OSoG) partners. Quotes taken from the interview specifically related to the five organizing themes of the OSoG project:

“We also learned that we have got to be incredibly patient. [Public policy work] is very time-consuming, it does not provide you with an immediate benefit necessarily, and you have just got to stay the course. If you look at some of our most successful partnerships with government, particularly in terms of public policy over the years, [00:03:00] it has really happened because we have been willing to hang in there, watch leadership in government in some cases change, and you think ‘Okay you have a new party, a new governor, what do you do now?’ But we’ve been willing to stay the course …”

“The first part of our public policy work was really very much oriented towards defensiveness. How do we protect philanthropy? How do we make sure that Congress does not pass laws that put philanthropy out of business? The second part of our public policy, which we really learned and grew into as we learned from these experiences, was the whole aspect of how do we partner with government around policy issues? And we realized that there used to be that belief that a foundation is a venture capitalist, we get something started, then we can turn it over to government and they will take it on and continue it, make it flourish and then take it to scale. It does not work that way. So we realized that we really had to — if we were going to leverage philanthropy in all of its finest ways — and not just money, I mean to use the knowledge, the convening power of philanthropy strategically — we really realized that we had to expand our public policy work beyond government relations and the regulatory issues and really look at key ways in which philanthropy in Michigan could be a partner with local government, state government and the federal government. And not every partnership has been successful, but the good news is that we have had some really major successes along the way.”

“We realized that if we did not be proactive and have a counsel that could meet with the office of the attorney general on a regular basis, that we might fall prey to regulatory activity that would not be mean-spirited, but which would be really uninformed … The good news about it is we have been able to do some things together which individually we could not have accomplished.”

“CMF is really very blessed to have great support from our larger foundations who understand the value of having a strong philanthropic sector both in the U.S. and globally. They recognize that we are part of a — philanthropy is very much a global phenomenon right now. So we have had the benefit of having financial support to share and to help others benefit from the lessons that we have learned here in Michigan.”

“CMF and my predecessor Dottie Johnson, obviously, was the leader in this, was very involved in forming the Forum of Regional Associations of Grantmakers, which is the national network. There are 34 regional associations covering all 50 states and one of the most important things that we could do was lend our experience, our expertise where it was appropriate, to really helping others form regional associations as well.”

“What I have learned since the Tax Act [Tax Reform Act of 1969] through being appointed CEO, is that there is a place at the table for all types of foundations. It is important, if we are going to be successful … it is all about relationships and sometimes that small family foundation that has a relationship with a local legislator or a cabinet official is incredibly critical to making a major collaboration work.”

Rotary Charities of Traverse City. (2014, August 27). About us. http://www.traversecityrotary.org/about-rotary/