Our State of Generosity focuses on the projects, systems, and relationships that foster philanthropy in all of its forms. Transmitting and strengthening this tradition in future generations is a goal involving decades of work and investment. Surabhi embodies the success of these efforts. Exposed to formal philanthropy at a young age, provided opportunities to learn and grow, empowered with money and access to lead at the local and state level, and offered an academic and career path, Surabhi speaks for the next generation of Michigan’s philanthropic leaders. 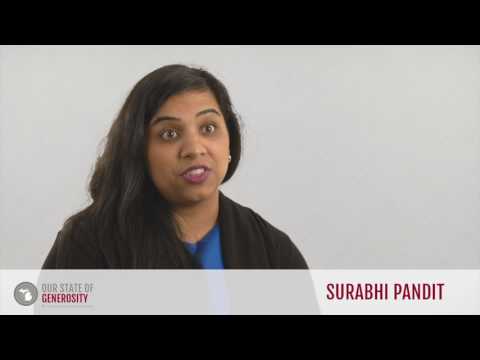 Ms. Surabhi Pandit talks about how philanthropy and government can learn from one another. 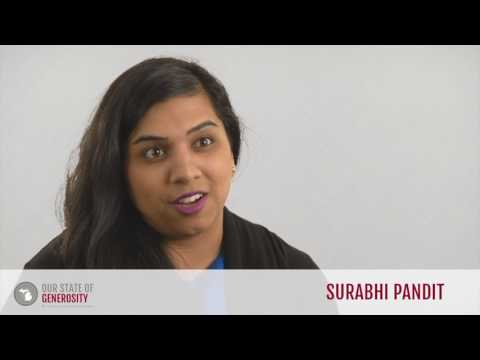 Ms. Surabhi Pandit talks about her career in philanthropy. 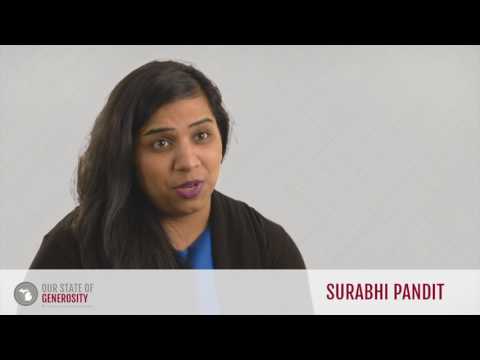 Ms. Surabhi Pandit talks about her experience as a Youth Advisory Committee (YAC) member and the flexibility she had working with local government. 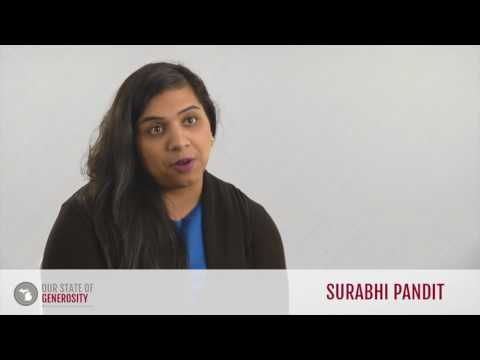 Ms. Surabhi Pandit talks about creating a teen center and organizing a youth diversity symposium through her time as a Youth Advisory Committee (YAC) member. 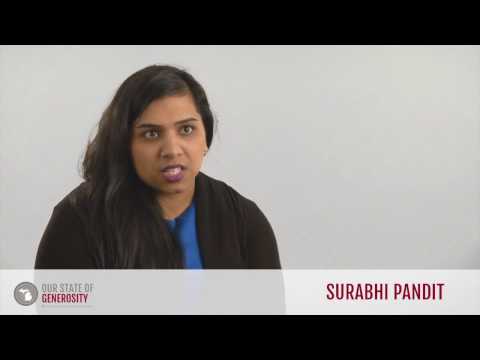 Ms. Surabhi Pandit talks about the participation and communication between young people and adults in Youth Advisory Committees (YACs). 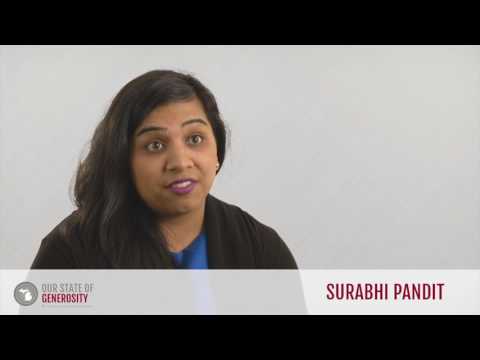 Ms. Surabhi Pandit talks about how her Youth Advisory Committee (YAC) experience taught her that a good leader leaves behind a framework so their efforts and vision can continue. 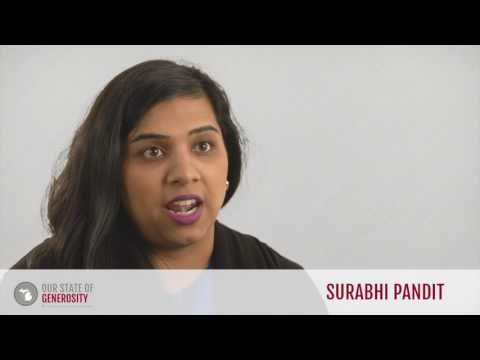 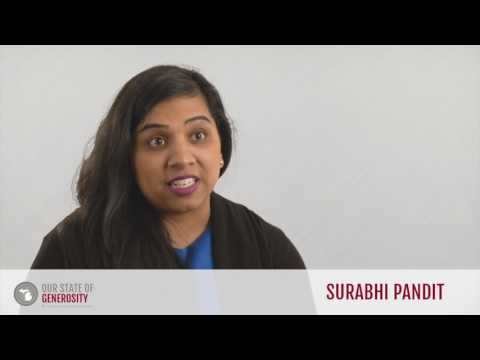 Ms. Surabhi Pandit talks about how Michigan is nationally known for its strong, philanthropic infrastructure. 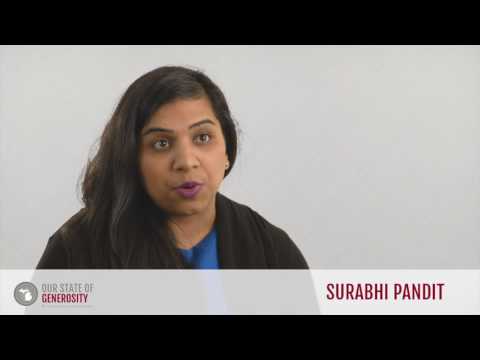 Ms. Surabhi Pandit talks about how people from all walks of life donate, and every contribution is appreciated. 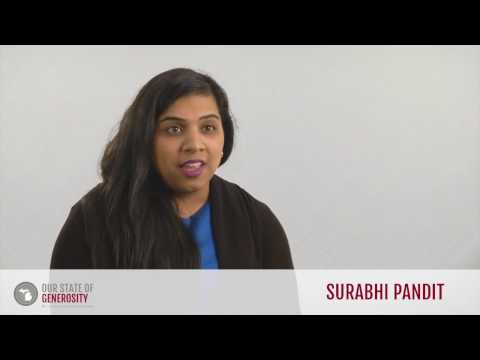 Ms. Surabhi Pandit talks about her friendship with Rob Collier and the value of mentoring in philanthropy. 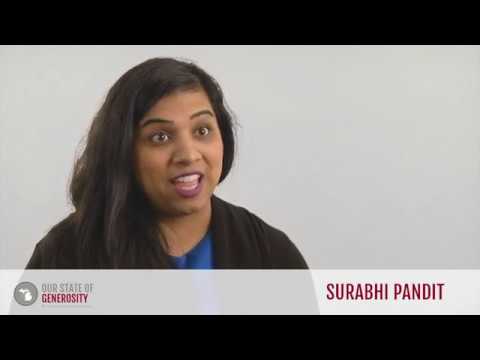 Ms. Surabhi Pandit talks about the characteristics a Youth Advisory Committee (YAC) must have in order to be successful.

Surabhi Pandit earned a Bachelor’s degree in Sociology and South Asian Studies  in 2010 and a Master of Social Work degree in Social Policy & Evaluation, and Community and Social Systems in 2011 from the University of Michigan.

“It made sense to me. It was my way of impacting the community – the geography of where I lived and the people that I really cared about.”

After high school, Pandit became a member of the statewide YAC under the Council of Michigan Foundations (CMF), the Michigan Community Foundations’ Youth Project (MCFYP). At 16, Pandit served as a trustee on the board of the Southfield Community Foundation. While on the statewide YAC leadership board, Pandit not only demonstrated dedication to philanthropy through volunteer service, but also gained experience in grantmaking. Pandit later interned for CMF, and eventually became a public policy fellow which exposed her to foundations across Michigan, and ultimately led to her involvement at the Community Foundation for Southeast Michigan.

While serving on the YAC in Southfield, Pandit and the other council members recognized the community’s desire for a teen center. Being down the street from the mayor, city administrator, and community foundation, Pandit worked relentlessly to see that the community eventually got the teen center it wanted. This experience developed relationships and helped Pandit become comfortable approaching the city’s administration on a regular basis. These networking skills were fundamental to the rest of her time with YAC, and essential to completing later projects.

“I was attached to no politics. I brought nothing with me other than I’m just a kid who cares about the community and so did my peers.”

Also while serving on the YAC in Southfield, Pandit helped organize an annual youth diversity symposium. Pandit recalled one of the greatest accomplishments of her YAC experience — one year they brought together about seven-hundred youth from all over Michigan to participate in a day-long discussion on diversity, from local issues to Supreme Court cases. The symposium was a fundamental event in involving youth in philanthropy and social justice all over Michigan. It began conversations on diversity and inclusion in philanthropy and in local communities, and provided experience to young people in organizing events and discussions. Though adult advisors oversaw the symposium, the youth of Michigan facilitated and organized all of the events and discussions, which provided invaluable practice for careers in philanthropy.

In 2014, Pandit became a program officer at the Community Foundation for Southeast Michigan. In 2015, she spearheaded Catapult, a program dedicated to community engagement through providing funding for entrepreneurs in the community.

Surabhi Pandit was interviewed regarding her insights and experiences working with Michigan’s philanthropic community and the Our State of Generosity (OSoG) partners. The following are qutoes specifically relate to the five organizing themes of the OSoG project.

“[Michigan leaders] are talking about issues we all care about. We are also figuring out what collaboration means. Sometimes collaboration ends up in funding collaboratives. Other times, it might be informally gathering peers and asking, What do you think about this work? What does this mean for you?”

“I would get phone calls all the time about how we do youth philanthropy. Why are you so successful in Michigan? People all across the country wanted to know what made us successful. I think through the partnerships with the Kellogg foundation, discussing why permanently endowed funds made this happen. We were not working in isolation.”

“…everybody shows up to the table in a different way. Success is sharing what the needs are…that everybody can contribute to solutions. Understanding what diversity and inclusiveness actually means is important to successful dialogues within communities.”

“…a good leader isn’t the person that does everything. It’s not necessarily my ability to accomplish something but it’s my ability to set the framework so that the task can be accomplished with or without me.”

“I think there’s a lot more space for increased collaboration amongst the foundations and among non-profits. Can we be partners at the table? We don’t have to sit across from the table, we can all sit next to each other, right? So figuring out how we can break down barriers and work more closely together because dynamics get in the way of effective work.”