William S. White was one of the longest-serving leaders of a major philanthropy in the U.S. During his tenure as president of the Charles Stewart Mott Foundation, White provided extraordinary leadership for the development and expansion of philanthropy in the Foundation’s home town of Flint, in the State of Michigan, in the U.S., and internationally. White collaborated with other funding partners of all sizes to support creative and innovative efforts, including the launch of the first funding collaborative to address the AIDS crisis, the establishment of environmental endowments in community foundations to protect the Great Lakes, and the development of community foundations around the world. White was a leader and long-standing supporter for increasing and improving philanthropy. 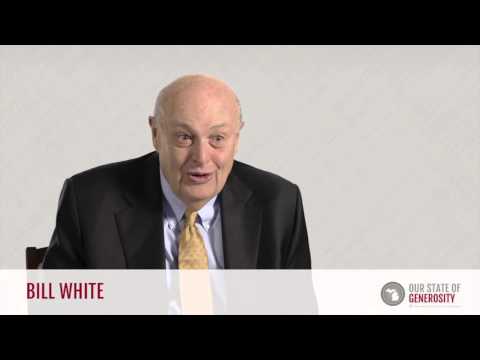 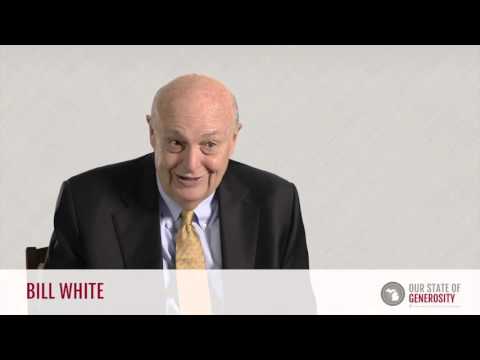 Mr. William S. White talks about how many of the people involved in the 1969 Tax Act didn't know each other at first. 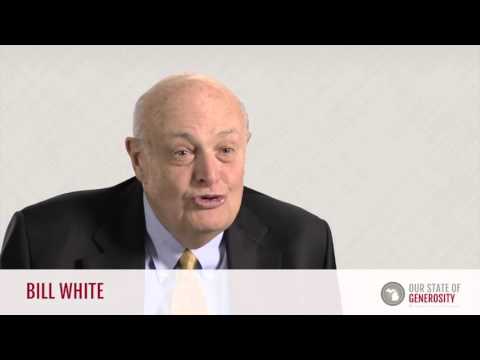 Mr. William S. White talks about the beginning of a legislative agenda for the 1969 Tax Act 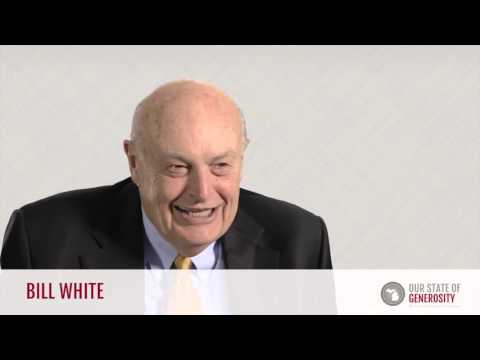 Mr. William S. White talks about the meetings and process of creating a 5% pay out rate in the 1969 Tax Reform Act. 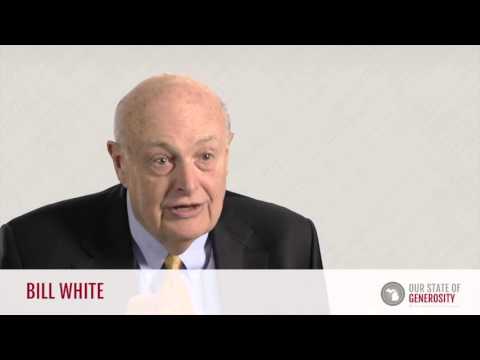 Mr. William S. White talks about the importance of connecting with state representatives. 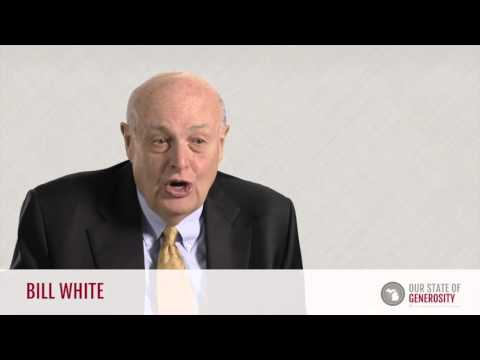 Mr. William S. White talks about the challenges the next generation will face in philanthropy. 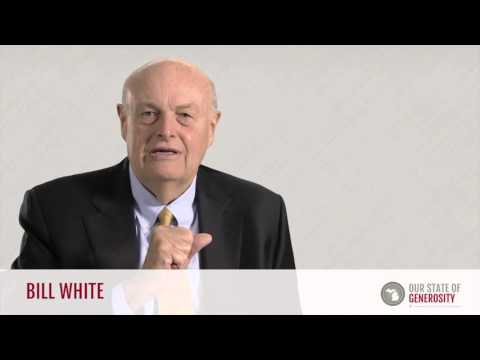 Mr. William S. White talks about how everyone can do their part in their corner of the world. 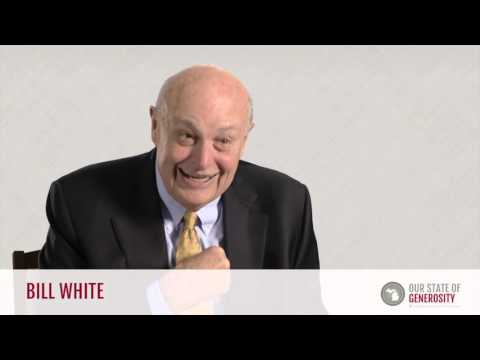 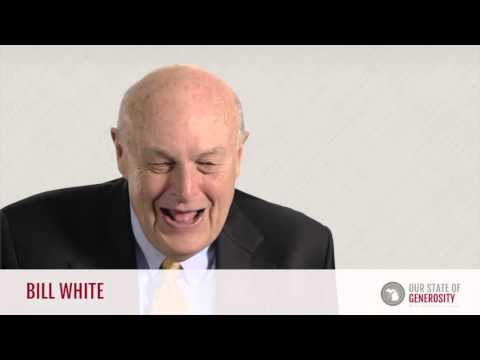 Mr. William S. White talks about how fortunate Michigan is to have a strong philanthropic infrastructure. 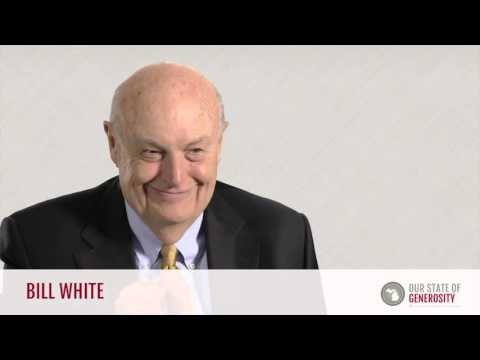 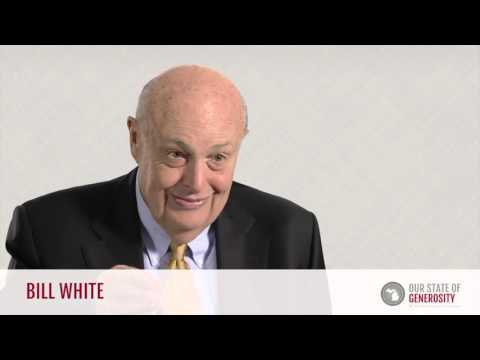 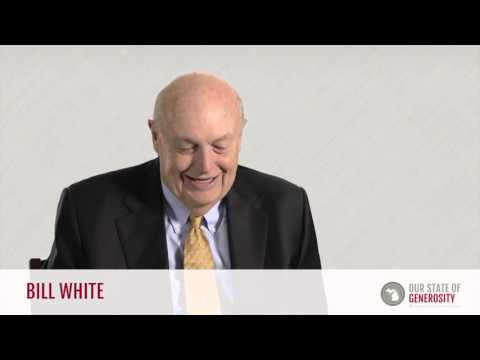 Mr. William S. White talks about his career in philanthropy. 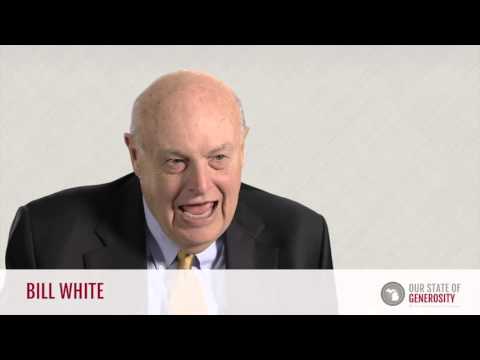 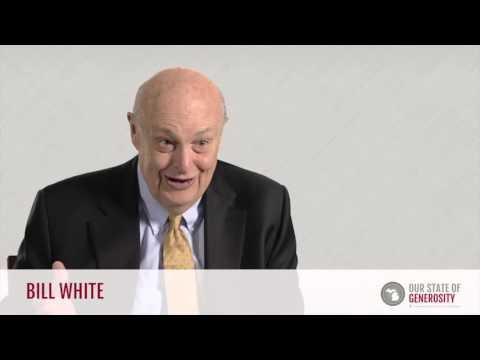 Mr. William S. White talks about his advice to the next generation of philanthropic leaders, including trust and respecting one another. 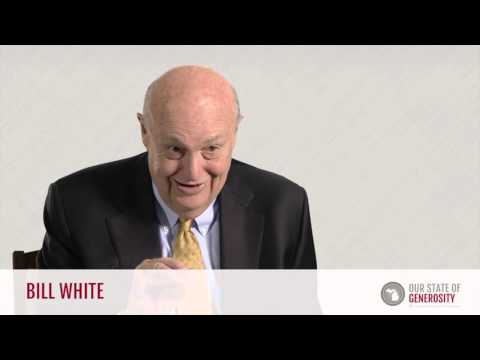 Mr. William S. White talks about the importance of bringing people together through community foundations. 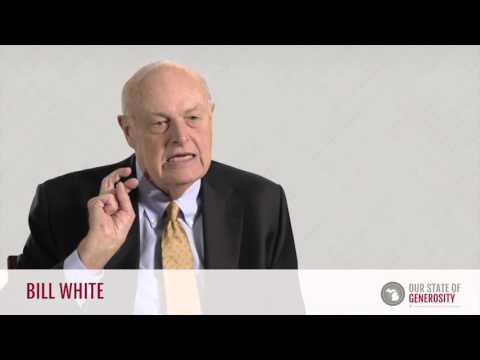 Mr. William S. White talks about the continuity of leadership and how philanthropy involves all the sectors coming together. 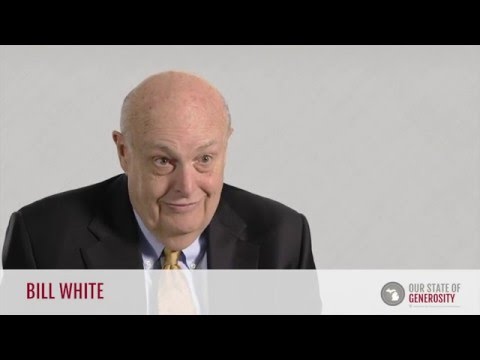 Mr. William S. White talks about the need for building community in the post-Soviet Union era. 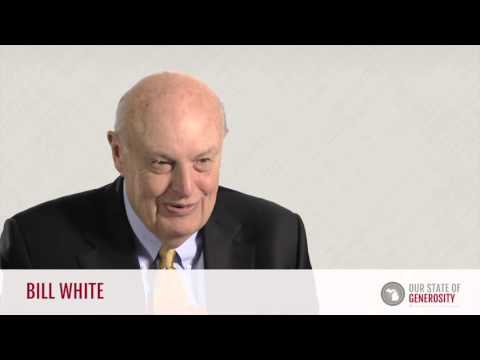 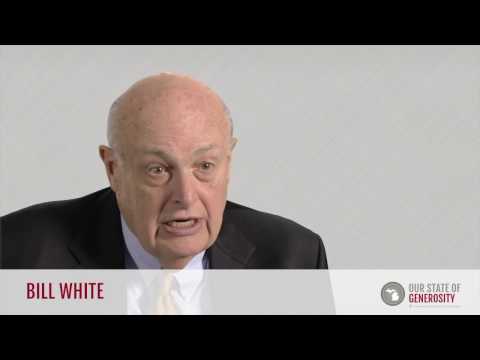 Mr. William S. White talks about the benefits of Michigan and investing back into the community. 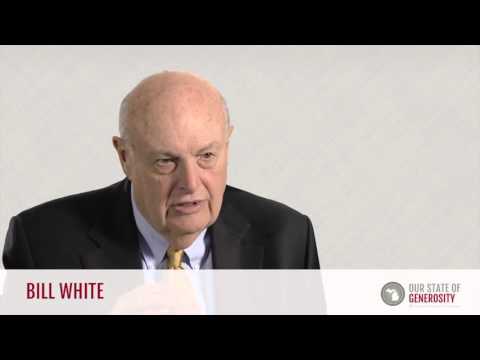 Mr. William S. White talks about how, through initiatives like WINGS and CIVICUS, people can find resources to support their visions for their communities. 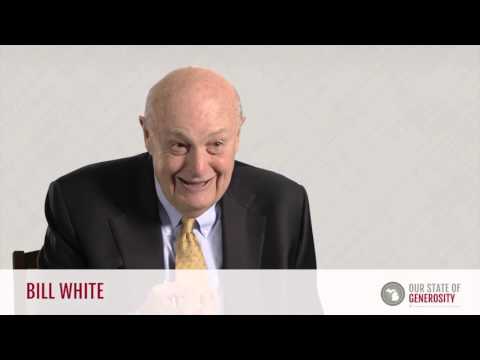 Mr. William S. White talks about what goes into creating a successful operation. 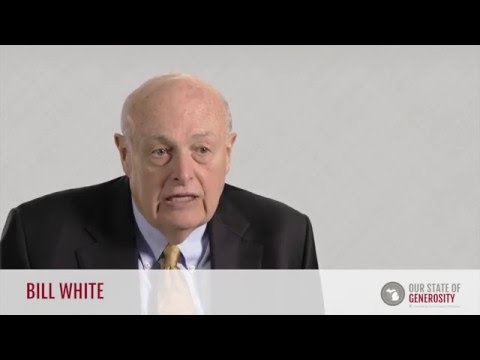 Mr. William S. White talks about the successes of the Global Fund for Community Foundations.

William S. White graduated with a Bachelor of Arts from Dartmouth College in 1959 and completed a Master of Business Administration at Dartmouth’s Tuck School of Business the following year. He received six honorary degrees.

Under William White’s leadership, the Charles Stewart Mott Foundation evolved from a primarily local funder to one that also works to improve the well-being of communities far beyond Flint. While the Mott Foundation has expanded its grantmaking nationally and internationally, it continues to direct significant funding to its home community, particularly in the areas of education, downtown revitalization, and the arts.

Mr. White maintained a strong interest in the field of after school and community education. In the U.S. alone, the Mott Foundation granted nearly $215 million to expand and improve the quality of afterschool programs, which serve more than 10 million children each year.

Among many contributions to the field of philanthropy, one of the most important was Mr. White’s tireless advocacy for modifications to the Tax Reform Act of 1969. The legislation had many provisions that were potentially harmful to the operations and philanthropic activities of grantmaking foundations. Components of the law, such as the original payout requirement of invested assets, would result in the eventual closure of foundations. For example, White referred to the Mott Foundation, “We were invested because it was a high-yield period and we had a lot of bonds. We were invested to earn over 7%, and we had to spend 5%-7%.” No funds were available for other foundation activities and, during economic cycles with lower investment returns, the corpus of the foundation would be diminished. In response to the new legislation, the Council of Michigan Foundations (CMF) put together a legislative agenda to take to Congress. As a board member of CMF, White was one of the key players in educating Congress about the ramifications of the law. White worked closely with members of Congress, traveling frequently to Washington on behalf of the nation’s foundations.

White affected policy on a national level and an international level. As part of his leadership with CMF, White had the opportunity to travel to Russia. Noting the unique moment in time created by the fall of the Berlin Wall in 1989, White used his influence and support to assist the seven European foundations to come together to form what is now called the European Foundation Centre. Additionally, White was one of the individuals that helped formulate the idea that led to CIVICUS and the Global Fund for Community Foundations.

During that same time period, White became aware of the emerging AIDs epidemic through his service as CMF’s board chair. White felt strongly that the AIDs issue needed to be addressed, and realized that no one foundation in Michigan had the focused mission or staff expertise to adequately respond to a growing health crisis. White committed $50,000 from the Mott Foundation as a founding gift to create the collaborative funding model of the Michigan AIDS Fund. The Fund brought together many foundations, large and small. Through collective action, Michigan helped lead foundation efforts to assist the grassroots groups working to solve the AIDS epidemic.

Under White’s leadership, the Mott Foundation also funded the technical assistance components of the multi-year, statewide Michigan Community Foundations’ Youth Project, spearheaded by CMF on behalf of the community foundation members. These investments mirrored similar commitments to help build community level endowed assets in community foundations across the nation and around the world.

A similar innovative leadership commitment made by the Mott Foundation, addressed the unique environmental treasures that are the Great Lakes that surround Michigan. On White’s watch, the Great Lakes Environmental Protection Fund was created, and a $9 million pledge for funding was secured from the governor. This fund has been around since 1989 and is still protecting the Great Lakes resources – which are 20% of the world’s fresh water.

In 2002, the Council on Foundations presented White with its Distinguished Grantmaker Award, which recognizes lifetime achievement in philanthropy. In 2003, he was awarded the Order of Merit of the Republic of Hungary, Knight’s Cross. In 2010, the Community Foundation Network in the U.K. presented him with its first Beacon Award for Services to Community Philanthropy. A year earlier, he received the European Foundation Centre’s Philanthropy Compass Prize, honoring outstanding contributions to the development of the European philanthropic sector. The Republic of Poland awarded him the Officer’s Cross of Merit in 2012 for his contributions to the development of civil society in Central and Eastern Europe. In 2014, COF honored White for his enduring commitment to the field of community philanthropy.

At its annual conference held on October 7, 2019, CMF celebrated Bill White’s five decades of philanthropic leadership with a video tribute, recognizing a man who did so much to help make good things happen in the Mott Foundation’s hometown of Flint and around the world.

White was known for his wisdom, wit and counsel. Each is highlighted in a video, In his own words: William S. White, produced for the November 4, 2019, “Celebration of Life” event held in Flint. This video offers a unique insight into a man whose career was remarkable for both its longevity and impact.

William S. White passed away on October 9, 2019, at the age of 82. Mr. White’s career milestones and achievements are documented in a timeline (C.S. Mott Foundation, 2019).

William S. White was interviewed regarding his insights and experiences in working with Michigan’s philanthropic community and the Our State of Generosity (OSoG) partners. The following are selected quotations from his interview specifically related to the five organizing themes of the OSoG project.

“I think the story, State of Generosity, it’s about good ideas. That’s what it’s all about, a good idea. You can’t keep it down.”

“….and about that time, the Soviet Union disintegrated. It just appeared to me. Never in my lifetime did I believe that this would occur. I couldn’t dream it. I thought, “I don’t know what we can do,” but I likened it to a grain of sand on a beach or a drop of water in the ocean. It only may be one drop, it may not be very significant, but I want to be one of those drops. I want to be there. This is the greatest thing that’s occurred in my lifetime almost.”

“No one else can do it. You can’t do it from Washington because each regional association has a broad range of members from the smallest foundations to the largest. When they come together in common cause, we appreciate each other. I don’t care if that foundation only has a few assets and a small single-person grant-giving program; but they may really be delving deeply and have a lifetime commitment to that giving program. They’ve got good ideas. I can learn from them. We can learn from each other, and that’s our strength.”

“It’s [our efforts in philanthropy] been about, ‘Let’s work together to solve a problem.’ Philanthropy should be about helping society come together – all parts of society. After all, as I once told the brand new Polish President (when he just became president of Poland, in his first 60 days): ‘There is no separation between a Mr. Mott, who was an elected public official, who was a financier, industrialist, a business person, and a nonprofit person. No, you cannot, Mr. President, separate the sectors. They’re all part of each other. If you don’t get that point, you miss it. They need to be together.’

“No. You can’t cut Mr. Mott into three different pieces…. All three sectors come together, one way or another, in most people’s lives.”

“Well, start with Mr. Mott, sweat blood occasionally. [Laughter] Secondly, trust the people in the other organizations. I think, in terms of leadership, you’ll have to learn to become a witness on the sidelines – or someone in the stands applauding great work. You’ve got to learn to recognize great work and trust. At times, you may want to hit them on the head and that’s fair… but you’ll have to trust them. I think that’s one of the things. It’s trust and respecting the opinions of others.”

“.…you don’t have to have the bright idea […]. If someone has a bright idea, sometimes you need to share that idea with others. As long as you get the job done, it doesn’t matter who gets the credit.”